On August 16, Herb Morrow, who is a candidate for Huntington Town Board, addressed his supporters at Finley’s in Huntington Village and discussed his vision for our Town. The event was a chance to meet the candidate and was also a fundraiser for his campaign.  Morrow told Huntingtonian reporters that he and his campaign organizers chose this venue and price point for the purpose of reaching out to a wide variety of  constituents who will hopefully support him in November. This event cost attendees $40 which is significantly less than other political fundraisers. It is not uncommon for these type of fundraisers to cost $250 per person or more which shut out many who cannot afford the price point to support the candidate of their choice. Herb is choosing to host a variety of events and fund raisers in the hopes of appealing to and meeting as many people as possible.

It was a fun and relaxed crowd as those in attendance enjoyed open bar and hors d’oeuvres.  Among those in attendance were Rob Conte, who be challenging Ester Bivona for Receiver Of Taxes, Dennis Garetano who is running for the Suffolk County Legislature 17th Distict and Angie Carpenter who will be running against Steve Bellone for Suffolk County Executive.  Mark Mayoka was also present at the event. Several in attendance said this was their first political fundraiser so perhaps Morrow’s goal of attracting new people to the political process worked out. 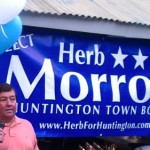 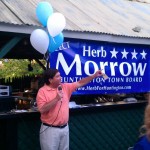 Herb Speaks to the Crowd 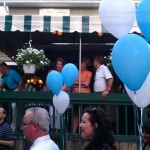 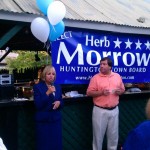