Prattsville, NY is known by many from Huntington. Huntingtonians have spent time with friends and family members enjoying the outdoors in the immediate area surrounding Prattsville, including skiing at Windham and Hunter Mountains.

Prattsville was first settled around 1763, and was called Schoharie Kill.   An attempt during the American Revolution by the British and their Tory allies to drive the settlers out was thwarted when they were defeated by the settlers.

Prattsville was established in 1824 from the Town of Windham. Some of the town was lost to form the Town of Ashland in 1848. 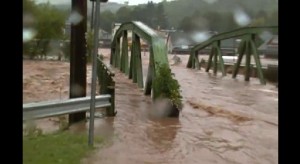 On August, 28. 2011, Hurricane Irene caused record flooding in the town by the Schoharie Creek, causing major damage and destroying large areas of the town. It received widespread national news coverage because the town had literally been washed away. Please see the following videos from CNN and Youtube.

The following Video is provided by a resident of Prattsville, NY:

The river takes out downtown Margaretville NY in the Catskill Mountains, right next to Prattsville: