Memorial to 43 Huntingtonians Lost on September 11

On Saturday, September 10, 2011 the Town Of Huntington will hold a memorial service to mark the 10thAnniversary of the Sept. 11, 2001 attack on the World Trade Center.  The memorial was created in 2007 to provide a place for families and friends to remember and reflect upon their loved ones.

Forty-three Huntington residents perished in the attack on the World Trade Center. Each will be remembered in a solemn service at the Town’s 9-11 Memorial in Hecksher Park. The service will include a musical performance by the Huntington Men’s Chorus, a rifle salute, a moment of silence, the placing of 43 roses at the base of the memorial and the reading of the names of the 43. The service will also remember the contributions of all the first responders who assisted in the rescue and recovery.

Several weeks following the attack, the Town Board passed a resolution creating a committee to develop a memorial to honor those who perished in the attacks. Following numerous meetings and consultation with families of those lost on September 11, the Commission recommended the construction of a memorial in Hecksher Park. The Commission solicited design proposals and following a meeting with the families, a final design was selected.

On Tuesday, June 19th, 2007, there was a solemn dedication of the Town’s 9-11 Memorial in Hecksher park.  The memorial was designed to pay tribute to the 43 lives lost who called Huntington home.  Friends and family of those commemorated gathered to witness the moving ceremony.  A member of the Huntington Fire Department sounded a bell as each of the 43 names were read.  There is a plaque at the cite listing the names of each of the individuals lost on that day.  They will always have a home in Huntington. 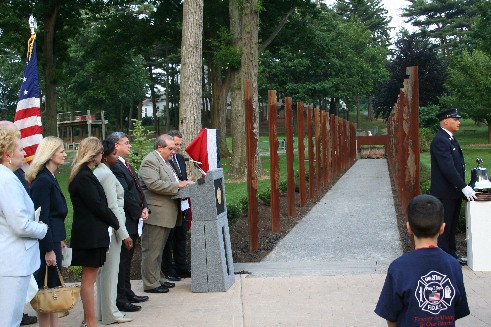