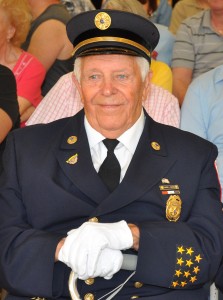 Family, friends, and fellow firefighters mourned the loss of Chester W. Senig, 94, a long time resident of East Northport and volunteer firefighter, who passed away on September 3, 2011. Chet was an active East Northport volunteer fireman for 58 years. During his service he held positions as 1st Assistant Chief, Financial Secretary and later served with the Fire Police. Chet worked at Grumman Aerospace for 43 years. He held several positions during his career and eventually became manufacturing supervisor of Electron Beam Welding. Chet also participated in the Apollo Moon Program as manufacturing manager of the Lunar Excursion Module (LEM) Ascent stage. Chet enjoyed a very active retirement. He was an avid fisherman his whole life and has fished from Alaska to Florida. Local boaters often saw him fishing from his boat on Long Island sound. Everyone enjoyed Chet’s humorous wit and straightforward demeanor. All of his children and grandchildren were taught to fish as soon as they could hold a fishing rod. He was predeceased by his beloved wife of 58 years, Evelyn. He is survived by son Chester Senig Jr. and his wife Barbara; by his grandchildren Jaime, Scott and his wife Michele and his great-grandchildren Samantha, Lauren and Jack, Erin Schirota and her husband Jeffrey; and by daughter Virginia Bradley and her husband Stephen; grandchildren Michael, Robert Villemure and his wife Lynn and his great granddaughter Jessica. Denise Villemure, and her husband Michael Crow and great grandson Trevor and his dear friend Kay Fox. The family received friends Tuesday, September 6, at Brueggemann Funeral Home, East Northport. Funeral services were held Wednesday, September 7, at Trinity Episcopal Church, Northport, with Interment following at Genola Rural Cemetery, East Northport. In lieu of flowers donations may be made to East Northport Fire Department or Visiting Nurse Service & Hospice of Suffolk, Inc. in Chet’s memory.

Photo above: by Steve Silverman