Wildcats Boys Soccer- It’s all about the Chemistry

Loaded with experienced seniors, Whitman’s Boys Soccer team just needs to add chemistry and they could be in for a very positive season. From the looks of their play in the Jimmy Egan Tournament, all the elements were in place and the chemistry worked magic. Taking Babylon 2-0 in the first game with a goal each by Andy Campos and Romel Giron, Whitman then faced Newfield for the championship game. Looks like they forgot to tell the Whitman kids how good Newfield is supposed to be, or how high they were ranked, because the Wildcats surprised their opponents with a commanding 4-0 win. “This was a complete team effort tonight.” Coach John DiGiacomo said to his team after the game. “This was as huge a win as any I’ve seen.”    Returning to play this year is Blaise Addeo, who missed all of last year with an injury. Also back is Romel Giron, Cesar Rivera, Daniel Zagorski, and Brian Krainer. This group makes up a solid core of players who are being counted on to move the team forward. “We can be as competitive as the best of them, said Coach DiGiacomo. “Chemistry is crucial to winning in soccer and we will need to fight hard for a spot in a very tough league.”

Whitman, with its impressive win of the Jimmy Egan Memorial Tournament, now gets down to the business of the regular season and two very tough opponents when they host Northport on 9/22 at 4:3pm and away at Hills East on 9/24 at Noon. The team returns home to host West Islip on 9/27 at 4pm. 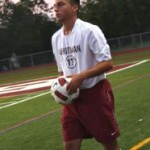 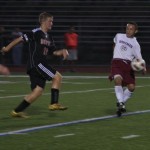 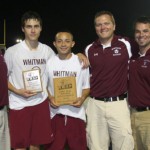 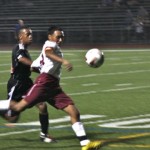 Wildcat Cesar Rivera-Perdomo was unstoppable as he took a brief second to enjoy all his hustle. 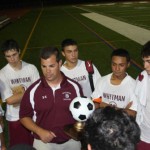 Coach John DiGiacomo with the tournament trophy tells his team; “This was a complete team effort tonight.”