Veterans Come Out in Support of a Cell Tower

On September 8th, about 50 people attended the ZBA meeting at Town Hall.  The majority of people in attendance were there to witness a case about a request for special use permit and variance for the purpose of erecting a 100 foot flagpole with cellular antennas and install related equipment.  The applicants were Metro PCS NY LLC and Clear-wire Legacy, LLC.  The location requested for the pole  was the VFW at 210 West Pulaski Road.  The owner of this property is The Nathan Hale Post Membership Assoc.

The Flagpole is designed to handle 3 carriers, Metro PCS will be the first.  This application was originally rejected because of opposition in the neighborhood.  After being rejected, Metro PCS  tried to find another location.  They identified a  junk yard on Rail Road Street as a possible location for their cell tower.  That application was denied too.  The ZBA board denied the second application because they felt that it was dangerous to the equipment such as bucket loaders which are stationed at the junk yard.  It was after the second rejection that Metro PCS came back to the VFW Hall location.  The members of the VFW were very disappointed when the first application fell through as the cell tower would provide much needed income for the organization. 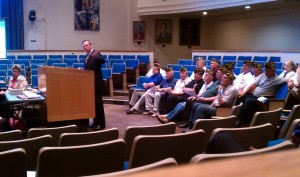 Mr. McCarthy who is the attorney for Metro PCS, presented the case at the September 8th ZBA meeting.  This time they reduced the height of the pole from 120 feet to 100 feet.  He explained, “The flagpole adheres to Town standards and regulations both on height and area.

Four local residents expressed concern about health issues and worried that the cell site would lower their property values.

After the speakers finished the ZBA board explained some of the technical aspects of why they felt this was a safe location and then they voted unanimously in favor of the special use permit. 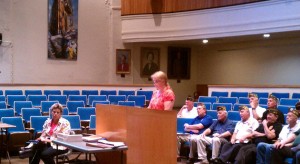 The Veterans who attended the hearing were very pleased with the outcome. One member stated “we need the money this permit will bring to maintain our facility”.  A resident who is opposed to the cell tower commented, “they are full every weekend and do not need the money”.

A Huntingtonian reporter called the accountant for the VFW hall for a statement about the group’s finances.  The accountant claimed that the money was desperately needed for the Veterans to continue operations.

The VFW Post Commander happily remarked, “I am happy that the board followed all regulations and came to the proper vote, I want to thank them for it.”