October 4, 2011 1:30 pm | Filed under: Around Town,Huntington,Huntington Station,News | Posted by: Huntingtonian 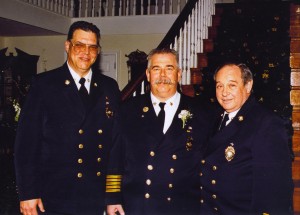 Photo above left: Charlie Hoffmann, second from left, is pictured with the Assistant Chiefs at his installation into office as Chief of the Huntington Manor Fire Department in 2000. From left are Mike Pastore, Charles Hoffmann, John Glidden, and Peter Nelson. Chief Nelson, also a New York City firefighter with Rescue Company No. 4, was tragically killed the following year on 9/11 at the World Trade Center.

Photo above right: Charlie Hoffmann, center, is pictured with the chaplains of the Huntington Manor Fire Department upon his installation into office as Chief of the Department in 2000. At left is Richard Holst who died in the Line of Duty in 2009. At right is Deacon Ed Billia.

The Huntington Manor Fire Department mourned the loss of Ex-Chief Charles Emil Hoffmann, 56, on September 24, 2011. Family, friends, and fellow firefighters gathered for a memorial service at Huntington Manor headquarters on October 1, 2011 to honor the well-respected Chief.

Charles “Charlie” Hoffmann was born in Flushing, New York on October 6, 1954. At the young age of three, his parents moved to Huntington Station. Charlie was a proud young man who served his country in the United States Marine Corps. On January 29, 1977, he married Candy Agnieszka. Soon after, he started his family with Candy and their daughter Tara. One of the happiest days of Charlie’s life was the day his son Jon Albert Hoffmann was born on July 7, 1979.

With firefighting in his blood from his ancestors who were also firefighters, Charlie entered the Cold Spring Harbor FD in 1980. On January 7, 1982, Charlie proudly joined the Huntington Manor FD. As a young and dedicated firefighter, he attended lots of training sessions and responded to every call he could. A key point in Charlie’s firefighting career came during the early evening in June of 1985, when Huntington Manor was dispatched for a house fire on New York Avenue and Second Street. Charlie’s quick thinking and bravery came to light when he found and rescued a girl from the burning house. Later that year, Charlie was presented with the prestigious Medal of Valor for his efforts.

Charlie’s drive for excellence continued as he took on a leadership role by becoming Hose Company Lieutenant in 1990. Progressing through the ranks, he went on to become Captain in 1992 and then Third Assistant Chief in 1994. As a First Assistant Chief in 1999, Charlie faced one of his first major challenges as an officer in May of that year. Huntington Manor handled a fire on West Hills Road where there were multiple fatalities that evening. Charlie was instrumental in making sure his men were recognized for their efforts by being one of the main driving forces in issuing a Unit Citation Award to every member that responded to that incident.

One of Charlie’s proudest moments came on January 5, 1999, when his son Jonny became a member of Huntington Manor FD Hose Company No. 1. Charlie had a smile bigger than his handlebar mustache that night.

With having a desire to take on more responsibility, Charlie became the President of the Town of Huntington Fire Chiefs’ Council in 1998. In December of 1999, Charles E. Hoffmann was elected as Chief of the Department. A true leader in the fullest meaning of the word, Charlie led his men in the best of times and in the worst of times. During his tenure as Chief, Charlie had to deal with the emotional stress in the sudden loss of his nephew Geoffrey, who was like a son to Charlie. After Jeff’s passing, Charlie got a tattoo in his memory that said “A life not yet fully lived.” As Chief, Charlie handled the Kleet Lumber yard fire which was one of the largest fires in Huntington Manor’s history. Charlie also led the forces in a rescue/recovery effort when a man fell into a cesspool on Hunters Lane.

One of the most memorable incidents was Charlie’s leadership during the events of September 11. Charlie remained steadfast despite being notified that Huntington Manor lost one of their own, Assistant Chief Peter Nelson who was working at FDNY Rescue Co. 4. The following weeks were quite emotional for the entire department. As Chief, Charlie held himself as well as all the members together strong, making sure that not only was the community safe during this time, but also ensured that Peter was given the most memorable service for everything that he did here as well.

In the 9/11 anniversaries that followed, Charlie made sure that we never forgot the events of that fateful day by ringing the memorial bell at the firehouse. He rang the bell 343 times, one for each firefighter that made the supreme sacrifice on that September morning.

Some of the other things that Charlie was instrumental in taking care of were cooking turkeys at the firehouse on the night before Thanksgiving. He would then give them to St. Hugh of Lincoln Church to serve the less fortunate residents in Huntington.

At home, Charlie was a very proud Grandfather and enjoyed spending time with his grandkids Natalia and Geoffrey. Charlie also had a passion for using his hands with woodworking and other fine crafts. He was an avid fan of history and the Civil War, and even participated in Civil War reenactments. Charlie also developed an interest in bagpipes and drums, and on a few occasions he could be found proudly walking around in an authentic Scottish kilt.

Charlie loved spending time with the brother firefighters, hanging out and listening to and telling stories of days gone by. After a meeting, Charlie would be found in the back of the room making sure that the firefighters knew the meaning of dedication, honor and tradition. Charlie, who was also known as “The Colonel,” will be greatly missed.

“Tonight we remember Charlie and everything that he proudly represented, he was a true leader and inspiration to us all. We will truly miss our Colonel. To Candy, Tara, Jonny, Lori and the rest of the Hoffmann family, thank you for sharing Charlie with us,” concluded the service.