More than Plants are Growing Out of the Community Garden. 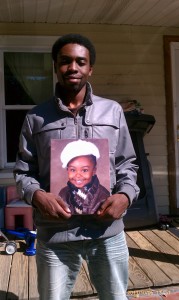 If this face looks familiar it is because Dave Francois’ picture and name were included in an article that was posted last week called Murals Bloom At Gateway Garden.  One of the things we try to do at the Huntingtonian is to anticipate what questions our readers may have while reading our articles.  We figure, if we wonder about something, others probably do too.  The article was sent to us along with the pictures.  Included was the picture of Dave in front of the microphone, but there was no caption.  To follow up, I contacted the sender to ask for a caption about the picture.  It turned into back and forth e-mails about Dave and the wonderful song he had written, composed and performed. Now I became compelled to meet him and hear his song.  Something told me, meeting him would be a rewarding experience, and as it turned out, it was.

Dave was born in Chicago, moved here at a young age, and went through the Huntington School District.  He now lives on Lowndes Avenue, where we both sat outside, on a stoop, and he played his song for me.  The song is one of those that reminds you of what is really important in life.  I was struck by the experience of  listening to a song about bringing people together and new beginnings, while sitting across from the Jack Abrams school.  I immediately felt something special was going to come out of this meeting.

Although it was his dream to have the community come together for his debut song, he never actually performed in front of people, until the celebration at Community Gardens.  It was Lucienne Pereira who encouraged him to perform the song.  He almost lost his nerve on the day of the celebration, but he really wanted to perform for his 4 year old daughter. 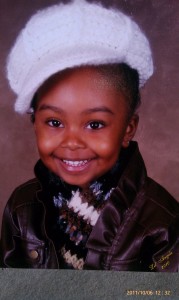 When I asked him “what was his inspiration for the song?,” I was surprised by his expression in reaction to my question.  He apologized and said, “I am sorry I’m so nervous, No one has ever asked me about me”.

He was told by friends, after hearing another song he wrote, that he has talent and he should pursue his dream. One day while at work, he started thinking about time passing by so quickly. This was around the time he found out that he was going to have a daughter. He decided he was going to finally attempt to do what he had always dreamed of.  He learned how to make a beat using a computer program.  The song had already been written in his mind, now he just needed to get it recorded.  “It’s called New years Project”, he told me.  “There are so many songs about Christmas, but not about New Years, which is when most people think about new beginnings”.

I asked Dave, “What do you want people to know about you”?  He flashed me a shy smile and said, “I’m just a regular Joe from Huntington.  I’ve come to a point in my life where I can see what the important things are; good friends, family, and inspiring people.  It would be my dream if something would come out of the song, but I’m moved that even a few people were inspired by it.”

Click the arrow below for a few second teaser from the song called NYA (New Years Anthem).
He is currently perfecting it and will have the full version ready sometime in November.  We can’t wait to share it.