Whitman Honors Athletes of the Month

Walt Whitman High School is honored to present 2 distinguished athletes for the month of September. John Palazzolo, a sophomore, is a member of the Boys Varsity Golf Team. At the time of his nomination for athlete of the month, John had an undefeated record for match play (5-0-1) and the lowest stroke average on the team (41.25). John finished the season with a record of 7-2-1 (best on the team) and 2nd on the team with a stroke average of 42.28. “John was the most consistent player throughout the season and I found his game and play to be much improved from last season.” said Whitman Golf Coach Mr. Alan Deitz. “His course management was sensible and well thought out.”

As the goalie for Whitmans’ Girls Soccer Team, Samantha Myers-Dineen recorded 4 shutouts in September, helping lead the team to a 3-1 league record and 4-2 overall.  “As of early October, Samantha  has 5 shutouts. “She has made some great saves and keeps us in every game.” said Whitman’s Girls Soccer Coach, Mr. Mike Moccia.  “It is comforting for both the coaches and I’m sure the entire team, that Sam is playing goal for our team.” 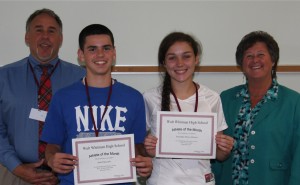