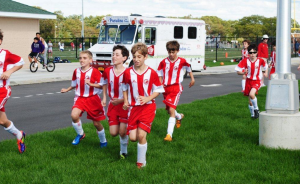 On Sunday October 23, there was a dedication at Breezy Park. The facility has been named in memory of 13 year old Brianna (Beezy) Titcomb who was killed by a drunk driver in Texas in 2005. Attending the ceremony were her parents, and Joe and Nikki Gregory, who donated $1 million toward the construction of the park in Brianna’s memory.  Members of the Huntington Town Board were present as well.

Brianna was a cherished member of the Cold Spring Harbor Soccer club. The Soccor Club worked hard to see this happen in Brianna’s memory.

The Town, partnering with Suffolk County, acquired the 11-acre property following a tireless effort by dedicated and caring residents and the Cold Spring Harbor Soccer Club to keep the parcel from being developed as a bus depot and repair yard for the South Huntington School District. The project’s funding sources include money from the Town’s Environmental Open Space and Park Improvement Fund (EOSPA), other Town funds and the donation from the Gregory family.

Nikki Gregory and representatives from the Cold Spring Harbor Soccer Club, the Huntington Sports League and the Huntington Village Lacrosse Club also spoke, followed by Brianna’s father, John Titcomb, who was flanked by his wife, Dawn, and son, Brett.

Let us not forget that the seeds for this park were sown and grew from the ashes of a tragedy, the loss of Brianna as the result of a drunk driving collision almost seven years ago. It involved the terrible behavior and choices of another individual, who changed our lives and those around us forever, John Titcomb said. From these ashes, passion, energy and vision produced something positive to hold on to, emblematic of a young girl and her love of life, sports, family and friends. Dawn and I would very much like to have this park not only known as an incredible facility with which to recreate with family and friends, but also as an educational awareness of the consequences to one’s self and others of the consequences of driving under the influence of drugs and alcohol. Use this park to educate our young family members and players about strong decision making skills that they will carry forward, not only for their own benefit, but for society’s as well. We truly feel that Brianna’s spirit will be carried on the shoulders of every player who not only plays sports in this park, but on those who come here at any age to play here on the playground watch their siblings compete and on those young and old who come just to watch and enjoy life.

Breezy Park was built on the site of the former Mohlenhoff Nursery. The Mohlenhoff family started farming the land in 1936. the business into a florist and garden center known across the Island. The nursery closed in 2005. The property is environmentally sensitive. It backs up on Suffolk County’s Froelich/Wicks Farm nature preserve.

The Titcomb family has commissioned a memorial to Brianna, which is under construction and should be ready for unveiling in the Spring. 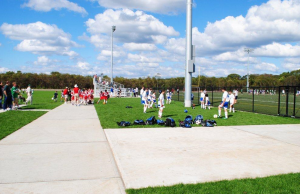 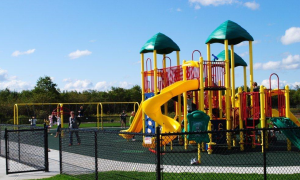