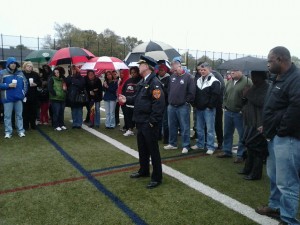 On Saturday, October 29, an emergency meeting was called by the Huntington Youth Football League for all parents and coaches.  The purpose of the meeting was to dispel any rumors and report the facts of a serious incident that occurred at Manor Field.

On Tuesday evening at approximately 5:00 pm children from the Huntington Youth Bulldogs Football team were entering onto the field.  The coach was a short distance away getting equipment out of the shed as the kids went onto the field.  There was already a group of teenagers who were not part of the Huntington Youth League playing there.  An 11 year old member of the Bulldogs approached the group of teenagers to let them know that they needed the field for their scheduled practice.  According to the 11 year old, one teenager believed to be approximately 16 or 17, responded by saying “you want a piece of this” while allegedly flashing a gun.  The 11 year old immediately reported the incident to the coach who notified the 2nd precinct.   Officers from the 2nd precinct questioned the 11 year old and based on the testimony are taking this incident very seriously.

The police questioned one person as a possible suspect but there was not enough evidence to positively identify the teenager.  According to Inspector Brady, who spoke at the meeting, the 2nd precinct has increased patrols in the area.  Don McKay who was representing the Town stated that public safety officers will now make sure the field is clear prior to games.  Several parents in attendance expressed concern that the Town has kept lights off at evening games.