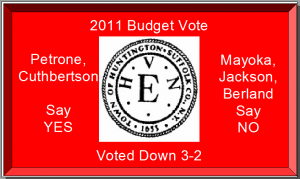 There is only one more meeting scheduled for this year on December 13th. There could be a special meeting called if necessary.

Susan Berland and Glenda Jackson stated that they voted against the budget because they were opposed to the deep cuts in the Arts programs.  You may recall that a group of arts supporters attended a Town Board meeting to speak out against these cuts.  They gave it quite an effort to save the program and it just may have worked.  Mark Mayoka opposed the budget because he he feels it is not balanced and too dependent on the use of reserve funds.  Frank Petrone and Mark Cuthbertson voted yes and were openly frustrated by it being voted down.  Mark Cuthbertson referred to it as a “travesty”.