Whitman’s Boys Cross Country team has won the Section XI Suffolk County Championships for the second time in the past 10 years. “This group of seven young men have many of the same qualities of the 2008 Championship team,” said Coach Rob Conroy. “They are all talented athletes, but they are also very disciplined and run with a lot of heart.” Having senior Patrick Cummings back in the mix after missing the divisional race a week earlier proved successful for the team as their final average of 17:09.64 was a full 7 seconds in front of second-place finisher Smithtown. “Patrick is the epitome of heart and overcoming adversity” said Coach Conroy.
“We knew we were going to have a pretty talented group this year,” continued Coach Conroy. “When this group were freshmen and sophomores they were winning their individual grade-level races, and this year we have accomplished our preseason goals of league, division, and now county championships.” The New York State Sports Writers Association currently ranks Whitman #8 in the state as the team heads to the New York State Championships this Saturday, November 12, in
Verona, NY.
Whitman’s Suffolk Championship 5000 Meter Run Class A results were as follows: Zachary Cammer, 16:46.50; Michael Damato, 16:50.40; Patrick Cummings, 17:01.40; James Vallar,17:32.90; John Aiken, 17:37.00; Chris Laucella, 17:40.20; and Brian Windisch, 18:09.40. “We could finish anywhere between fourth and seventh in the state.” said Coach Conroy. “Our preseason goal was to be in the top 4 or 5 in the state, so are pretty close to our target with our goals so far.” 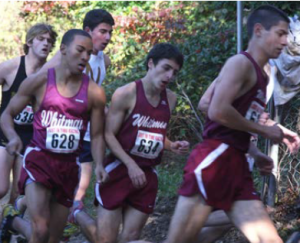 Photo#4 Heading into the
last 1/2 mile, the Warrior –
Patrick Cummings 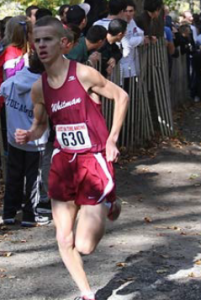 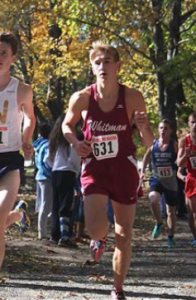