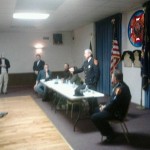 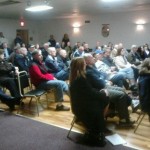 Inspector Brady was the guest speaker at last nights meeting of the Greater Huntington Civic Group. The meeting  was well attended which was no surprise since one of the groups missions is to address safety, crime and other quality of life issues.  Residents who attended were looking for information and solutions to what seems like an endless escalation in crime.  The most recently publicized violence was last Sunday’s shooting near the Lincoln Apartments in Huntington Station.  Three  men were shot on Sunday afternoon by a group of individuals who surrounded their car.  It is presumed that this incident was either gang related or a drug deal gone bad.  Inspector Brady attended to give residents the opportunity to ask questions.  After the meeting, the general feeling was, “same old, same old’.  Residents asked direct and specific questions and were given the typical general answers.  Inspector Brady was professional and polite in addressing the residents.  It seemed he was trying to answer the questions as directly and accurately as the situation would allow.  Law enforcement is only one component of a complex problem.

Collectively it was a knowledgable and determined group of local residents that have become well versed on the causes and issues surrounding the problem at hand.  Some in attendance have been fighting this battle of crime and safety for decades, others have come to the table more recently.  Rich McGrath and Liz Black from the Huntington School Board attended, as well as former BOE President Bill Dwyer.  Huntington Bay Mayor and former Town Council candidate Herb Morrow attended as well.

Justin Thompson of the Village Tattler, who wrote the Thompson report was in attendance.  The Thompson Report, which was published around 2005, discusses crime, citizenship and illegal housing in Huntington Station.  “I wanted to do an update of that report in October of last year,” explained Thompson. “I filed another request under FOIL for the same data and I got smoke and gossamer by the Suffolk County Police Department”.  He is currently attempting to write a more current version and the proper authorities are not complying with the FOIL requests.  If crime is decreasing in Huntington Station as is being reported, providing Mr. Thompson with the information would substantiate that.  Obviously the reverse is true as well.  Justin was clearly frustrated and expressed that to Inspector Brady.  Inspector Brady’s response was that he would need to continue to reach out to “whoever is in charge of central records”.   Thompson stated, “I dispute your contention that crime is down”.

Residents asked over and over, “what can we do to help those in charge to help us?”  Inspector Brady repeatedly answered that one solution would be to form neighborhood watch groups.  He suggested that residents should call 911 whenever they see something suspicious.  Residents who want to form a neighborhood watch group can call the 2nd precinct for guidance.

Jennifer LaVertu, who is one of the board members of the Greater Huntington Civic group asked Mr. Brady, “What would be your wish list” in terms of addressing this issue.  She continued, “Do you need more officers? Do you need additional legislation?” He never really answered the questions.

Several residents expressed how fearful they are and stated that gun violence is an ongoing problem at the Lincoln apartments.

Liz Black, current Huntington School Board Member and former 18 Legislative District candidate asked, What can be done to make the area around Jack Abrams School safer? Inspector Brady explained that it will take more than arrests.  He added that the community can implement diversion programs for youth to try to break the cycle.

The subject of code enforcement came up over and over.  Officer Brady stated that if there are obvious code violations at an address police officers report them to the Town.  One resident asked, “What is the Town doing after these violations are reported?”  This resident went on to explain that he has seen Town Code Enforcement officers at specific addresses where there were blantantly obvious violations and nothing was ever done.  Inspector Brady’s response was, ” I am sure if an officer reported it something was done.”

Huntington Station resident Nick Wieland stated that he was told by Susan Berland that she has been unable to get crime information from the police.  He was trying to clarify if that was accurate information.  Rich McGrath, continued Wieland’s point when he stated,  “It all starts with the data. Do you share information with the Town on a routine and systematic basis openly?” Inspector Brady’s response was, “I believe they do, I am not sure. I think they might, I will check into that and get back to you.”

Steven Sprucces, the GHCG President stated that it is one of the goals of the group to coordinate information between the police and the Town Board.

Another resident explained that he was part of the Law Enforcement Committee of the Huntington Station Action Coalition which put out a report in 2010.  He was wondering what happened to that committee.  He claimed to have attended one meeting and then heard nothing else.  Inspector Brady stated that the group is meeting monthly at the Tri-CYA.  To which this man sarcastically commented, “I guess they lost my name and phone number.  He then stated, “It is unfortunate that we don’t have anyone from the Town here”.  The leadership of the GHCG explained that members of the Town were invited.  Newly elected Councilperson Gene Cook was not available to attend but sent a representative.

Reoccuring themes in what most residents had to say were that FOIL laws are not being complied with throughout the Town, residents are not told the truth and treated with respect, and blatant code violations are ignored.  Residents continued to ask over and over, what can we do?  What do you need?  To which Inspector Brady continuely answered form neighborhood watch groups, let us know what is going on.  He tried to explain to residents that according to statistics, that crime is down.