It’s opening night at the charming old Harlequin Theater, but the entertainment isn’t onstage — it’s all happening in the lobby. The theater is about to be shut down by the fire marshals, but the ushers and managers who work there will have nothing of the sort and conspire to make all right for the inspectors. There is never a dull moment in this 2-act comedy lasting approximately 90 minutes.

Performances will be on Friday, December 2nd at 7:30PM,
Saturday, December 3rd at 7:30PM and Sunday, December 4th at 2PM
in the WWHS Performing Arts Center. Tickets are $8. Adults – $6. Students/Seniors 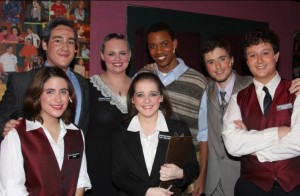 Photo above by Steve Bartholomew:  Some of the cast members from Whitman’s comedy play ‘Down in Front’ take a break from dress rehearsals for this weekends opening. Left to right: Angela Severino, Cole Dybec, Sarah Klaum, Olivia Marchionda, Kevin Osse, Sean Conlon, and Zach Thompson.