December 30, 2011 7:25 am | Filed under: Around Town,Arts & Entertainment,Centerport,News | Posted by: The Huntingtonian 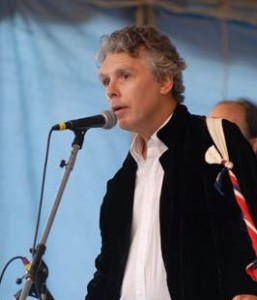 Singer/songwriter/storyteller David Massengill performs for the Folk Music Society of Huntington on Saturday, January 7, 2012 at the Congregational Church of Huntington, 30 Washington Drive (off Route 25A), Centerport. Tickets for the 8:30 p.m. concert, which is preceded by an open mic at 7:30 p.m., are $20; $15 for FMSH members, and will be available at the door. For more information, visit www.fmsh.org or call 631-425-2925.

From his early days on the Greenwich Village folk scene in the mid-1970s to his recent teaming with the late Jack Hardy, with whom he last performed for FMSH as The Folk Brothers in 2009, David Massengill is as essential to the New York folk community as a boy from Tennessee can be.
Noted for his mountain ballad-style story songs, Massengill is as distinctive a performer as he is a writer. Accompanying himself mainly on an Edsel Martin dulcimer, he also is a charming and witty storyteller. Called “a master of vivid lyrical imagery” by The Boston Globe and “a gem of thinking man’s romanticism” by Rolling Stone, Massengill continues to create beautiful and poignant story songs that are intimate and relevant and tug at our emotions. Rich with insight and poetic imagery, his songs have been covered and recorded by Joan Baez, David Bromberg, Shawn Colvin, Nanci Griffith, Lucy Kaplansky, Chad Mitchell, Tom Russell and his late mentor, Dave Van Ronk, who said Massengill “took the dull out of dulcimer.” The sound of the dulcimer has an intimate, detailed quality that complements the easy grace of Massengill’s stage presence, and he wrings from its few strings a complexity and richness far beyond anything it was meant to produce, drawing the listener close in on the human foibles and experiences that are the substance of his best songs.
During this concert, Massengill plans to pay tribute to Dave Van Ronk and to Jack Hardy, who played a pivotal role in the New York folk/songwriting scene for several decades and influenced and inspired many other songwriters. He’s also encouraging people to perform Jack Hardy songs during the open mic that precedes the concert.
Now in its 43rd year, the Folk Music Society of Huntington presents two monthly concert series, a monthly folk jam and sing-along, and an annual folk festival in conjunction with the Huntington Arts Council.
Facebook Comments must be signed into Facebook