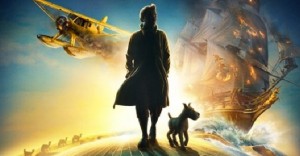 Steven Spielberg is without a doubt the master of the adventure genre. Raiders of the Lost Arc is arguably the best action-adventure film of all time, and Jurassic Park isn’t far behind. Considering that animation is virtually limitless, giving its director a chance to do anything they can imagine, it seemed natural for Spielberg to make the transition into the format at some point as he does in his newest film, The Adventures of Tintin. It’s no Raiders of the Lost Arc, but its still a thoroughly enjoyable family adventure movie worthy of Spielberg’s lineup.

The Adventures of Tintin is based on a popular series of comic books by Belgian artist Georges Remi, especially popular in Europe. It follows Tintin (Jamie Bell), a young journalist who purchases a model ship from a local marketplace. He is pursued by the sinister Ivan Ivanovitch Sakharine, played by Daniel Craig, who wants to steal Tintin’s ship for an unknown purpose. The two are thrust into high-speed chases and set pieces, with Tintin accompanied by the drunken, aloof Captain Haddock, all the while trying to uncover the mystery behind this strange ship, the Unicorn.

The Adventures of Tintin was filmed using motion capture animation, where actors’ movements are recorded and then replicated onto the digital, animated model. This process works better in some films than others, but in Tintin it really works. The animation looks gorgeous all the way through, with some images looking about as close to real, live action as I can imagine from an animated movie. Every frame of the film feels meticulously designed, especially during the adventure scenes, where there’s often many different objects and people whizzing across the screen simultaneously. Ultimately what’s so exciting about animation, though, is that unlike live action, directors don’t have to worry about practical camera placements or movements. In animation anything is possible, so Spielberg can easily swing the camera wildly around a moving plane in a ferocious thunderstorm if he wants to. During much of the action the camera is the real star, soaring behind the characters and through the scenery all in a single take and without any edits. It’s in this department that Tintin really shines. Watching the film felt like going on an amusement park ride: we’re given a basic setup and some characters to follow as we wait in line and then, suddenly, we’re catapulted into a high speed chase which never lets us go for a second. Particularly one of the final action sequences, which takes place on the streets of Bagghar, is one of the most awe-inspiring sights I’ve seen on screen this year. That chase alone is worth the entire price of admission.

The problem with Tintin, though, lies in its characters. Tintin is no Indiana Jones. We know that he’s an adventurous young reporter, but the film gives us nearly nothing else about him to latch on to. Where as Indiana Jones is an incredibly iconic character who most of us could recognize just from a silhouette, Tintin has nearly no defining characteristics at all. He comes across less like a movie character than a video game one, serving to thrust the story forward but not having much depth to him. Captain Haddock, Tintin’s sidekick, is fun, silly comic relief, but not much more than that. I was never as invested in the characters in Tintin as in Raiders of the Lost Arc or Jurassic Park, which lead to the action scenes being thrilling and exciting on a visual level, but not quite having the same impact or emotional weight as they could have if I truly cared about the protagonists involved.

Tintin was written by Steven Moffat (Doctor Who), Edgar Wright (Shaun of the Dead) and Joe Cornish (Attack the Block), and its humor is a blend of all three of their styles. Like Shaun of the Dead, much of the humor comes from background gags or small, quiet remarks, and Steven Moffat and Joe Cornish certainly bring a lot of clever, British-style humor through their dialogue as they usually do, though at times it can get a little over the top. The gags are often broad and slapstick, and not all of them land as well as they should, but for the most part the humor makes the film feel light and pleasing, not being outright hilarious but getting a few laughs here are there, as many great action adventure films do.

The Adventures of Tintin is an enjoyable, crowd-pleasing adventure romp the whole family should enjoy. It’s light, whimsical, often humorous, and the action scenes are truly awe-inspiring, a few of which stack up with some of Spielberg’s best. Especially for American audiences unfamiliar with the franchise, Tintin may come across as somewhat of a bland protagonist in comparison to Spielberg’s others, but really, the film is not overly concerned with its characters. It’s more like a theme park attraction, showing off the visuals and non-stop excitement, and in that way, Tintin really works.