January 18, 2012 10:27 am | Filed under: Huntington Union Free School District,News | Posted by: The Huntingtonian 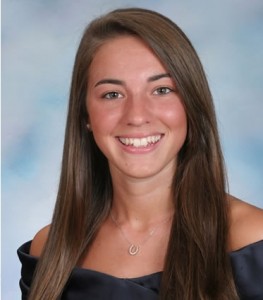 The Huntington High School girls’ basketball program never forgets one of their own. The Blue Devils will honor Courtney O’Bryan, retiring the cherished player’s No. 11 uniform number and celebrating her life on Thursday night, January 19th at 5:30 p.m. during pre-game ceremonies in Louis D. Giani Gym.

Ms. O’Bryan, who was a freshman at Penn State University, was a passenger in a car on its way to Buffalo to raise money to battle pediatric cancer on Friday, December 2 at about 8:30 p.m. when it reportedly hit an icy patch of roadway in Lewis Run in northern Pennsylvania, careening out of control, flipping over, sliding down a highway embankment and crashing into a tree.

The Huntington alum, who was riding in the backseat of the 2011 Nissan Pathfinder was mortally injured and four other students in the car were hospitalized. The accident occurred on State Road 219, about one mile south of State Route 59 according to the Pennsylvania State Police.

A capacity crowd is expected to attend Thursday night’s event, which will include remarks by Ms. O’Bryan’s father, Bill and Huntington Director of Athletics Georgia McCarthy. Ms. O’Bryan earned varsity letters with the Blue Devil soccer and basketball teams and played two years of lacrosse. She quickly won the hearts of teammates and fans. 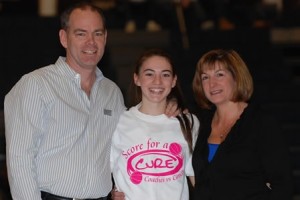 Huntington basketball coaches Mike Kaplan and Marissa Bergmann will present Ms. O’Bryan’s parents with her No. 11 jersey during ceremonies that will run about 15-20 minutes. The jersey is expected to be framed and placed on permanent display in a gym lobby showcase. 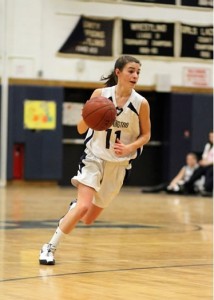 “This night is something that is going to be extremely touching,” Kaplan said. “A month ago the players and coaching staff made a decision to retire her jersey. We wanted to do something that would honor Courtney. We wanted to give her one night that was all about her, to pay tribute to a remarkable individual. This is a time to honor Courtney as a student-athlete here at Huntington.”

Food and refreshments will be on sale during the evening along with special t-shirts. All proceeds will be earmarked for a scholarship fund that is being created in honor of the beloved teenager. “I know our team is very excited to be able to help out and be part of such a special night,” Kaplan said. “I know this night will be a success because of how much Courtney loved giving back to others. This night will just add to the wonderful memories we already have of Courtney.”

“I feel very blessed to be involved in Courtney O’Bryan Night,” Bergmann said. “I am very excited that we decided to retire her number. I know there is a great deal of meaning behind No. 11 and I am glad that it will always stay that way. The evening will be one filled with joyful memories of Courtney.”

A slide show containing photos of Ms. O’Bryan will run continuously on a monitor throughout the evening. Following the ceremony, the Huntington girls’ basketball team will play West Babylon in a League IV game.

“Courtney was very special to me and I feel honored to be part of something so special,” Bergmann said. “She was a very giving person and gave to others in so many ways. Without even knowing it, OB touched so many lives. This dedication is one way for us to say thank-you to her and her family for all they have done.”

Several of Ms. O’Bryan’s former Blue Devil teammates have indicated they will be in attendance Thursday night. Huntington Booster Club members will also be on hand.

“Courtney was extremely easy going and positive,” Bergmann said. “Her smile showed us someone constantly full of joy. I know this night will be one filled with the same emotions.”