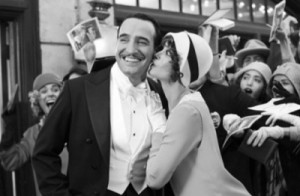 “I don’t think I’d be able to sit through a movie with no dialogue or color.” That’s a comment heard quite frequently in discussion of The Artist, the new film by Michel Hazanavicius awarded the Golden Globe for Best Film: Comedy or Musical on Sunday. Yes, The Artist is a black and white film with no spoken dialogue, and yet it feels more engrossing than so many big budget Hollywood movies in recent memory. During the 1920s, when no sound or lavish special effects were available, movies relied solely on the performances, with no billion-dollar CGI to cover up weaknesses elsewhere. The Artist takes us back to that time, telling a story about silent films while also becoming one itself, showing us the magic of Hollywood at its best. Aside from that, it’s also a rather charming love story, which really could take place in any time period. It’s a shame that the gimmick will probably deter many moviegoers, because The Artist is a hugely entertaining, lively, and well-acted film deserving of all its acclaim.

In 1920s Hollywood, actor George Valentin (Jean Dujardin) is thriving, starring in silent films which thrill their audience, despite the minimalistic nature. He appears after screenings to work the crowd with charm, and he’s clearly someone who loves what he does, making everyone around him fall in love. It’s hard not to with that charming, contagious smile of his. He meets Peppy (Berenice Bejo), a young dancer looking for her big break in entertainment, and he immediately feels drawn to her. But from the start we know Valentin’s business is doomed. It wasn’t long before silent films became a dying art in favor of talkies, which Valentin laughs at and dismisses as a cheap gimmick. Soon, however, he begins to realize his career has nowhere to go but down, as what he does as a silent film actor becomes more and more obsolete.

At first glance, what The Artist does can seem like a gimmick, but the film justifies its style almost immediately. It’s not silent just for the sake of being different; The Artist takes on the style of a silent film while telling the story of one, and it also plays with your expectations, acknowledging the fact that you’re watching a film with no dialogue. In one particularly memorable scene, George Valentin has a nightmare of a world filled with sound. But really, except for when it was explicitly acknowledged, despite the lack of dialogue there were few moments when I felt like something was missing. The Artist, though seemingly so absent of what we would expect from a movie in 2012, feels so self-assured, so confident of what it’s trying to do, and so perfectly executed in nearly every way. It has no color and not much sound, yet it contains all of the elements it needs to be a genius piece of cinema.

What about characters, though? How exactly do you get an audience to care about protagonists whose voices they never hear? Well, like in real silent films, it’s all about the facial expressions, the movements, and the subtle glances to one another, which actors Jean Dujardin and Berenice Bejo capture flawlessly. Valentin is often exaggerated, and yet he feels like a real character with personality, not simply a vague sketch what a silent film star would have been like. In his moments of despair, I sympathized hugely with Valentin, his future, and his relationship with Peppy. Believe it or not, their passion does feel real and inspired, and during one moment near the end I was on the edge of my seat. I was genuinely surprised at how much the story affected me, and that the movie was able to rise so far above the gimmick. This is all accomplished with such elegance and perfection; George and Peppy say less than any movie character of the past year, and yet I felt no less involved in their affairs than anyone else.

For the majority of The Artist, the only sound we’re given is the score composed by Ludovic Bource, which rightly won the Golden Globe for Best Original Score on Sunday. The music is snappy and lively at times, and appropriately melancholic at others, used at perfect moments throughout the film. It never feels intrusive, and certain bits are appropriately memorable and catchy. Bource’s score may be a part of why having no dialogue didn’t feel like a loss, because at times the music almost feels like its own kind of dialogue with the audience.

The Artist might sound to you like an Oscar bait movie which probably would only be appreciated by film majors, not something a typical moviegoer would enjoy. But actually, I can’t think of anyone I would not recommend The Artist to. For lovers of cinema, it’s a nice companion piece with Martin Scorsese’s Hugo, exploring the early days of the art form and particularly the actors involved. But I would recommend The Artist even to someone not interested by that description. It’s an interesting experiment in how much you can accomplish in a movie with so little, but at its core The Artist is simply a very effectively told, crowd-pleasing story which should not be missed. Believe the hype.