January 24, 2012 6:56 am | Filed under: Huntington Union Free School District,News | Posted by: The Huntingtonian 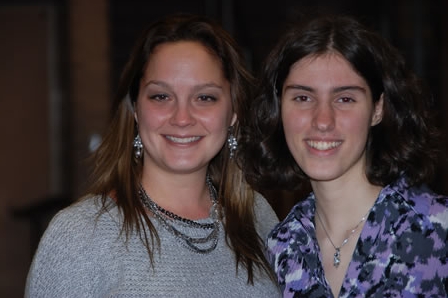 A Huntington High School senior, Juliana Coraor was named an Intel Science Talent Search semi-finalist, elevating her into the ranks of America’s elite young minds. “I am really honored,” the teenager said in her typically humble way. “It’s flattering.”

Ms. Coraor conducted research for the Intel competition in a lab at Stony Brook University, where she has also taken college classes as a high school student. “Juli is simply remarkable,” said Lori Kenny, a Huntington teacher who heads the school’s science research program.

“I was thrilled when Mrs. Kenny called me to tell me the news,” Ms. Coraor said, recounting how she learned she was an Intel semi-finalist. “I was convinced that I wasn’t going to be a semi-finalist, as my brother (Everett Coraor) was informed before the public announcement that he was a semi-finalist in 2010 and I had received no such notification about my status. I was in such disbelief that I asked Mrs. Kenny to check the website announcement multiple times to be sure that my name was one of the ones listed.”

“Juli is conducting research that’s on a post-doctoral level,” Mrs. Kenny said. “Watching her is amazing. She is such a hard worker and has such a busy life, but she never shows any stress. She has really helped us build Huntington’s science research program.”

“The research I did for my project was conducted at the physics department of Stony Brook University as part of the Simons program, a summer research program for high school students that paired students up with professors in specific fields of science,” Ms. Coraor said. “I worked with Professor Matthew Dawber on ferroelectrics, which are materials with special electrical properties. I conducted this research from late June to early September. The summer was a tremendous experience, as I was able to work in an actual research group on a project that was mainly of my own design. I really have to thank my professor who has done so much to help me with my research and these competitions.”

Ms. Coraor might not display the telltale signs of stress, she laughs and says she feels it but just doesn’t show it. “I’ve been fortunate to have Mrs. Kenny supporting me and helping me every step of the way.” While the teenager’s research has been conducted in one of Stony Brook’s high-end labs, Mrs. Kenny has coached Ms. Coraor on how to present her work.

“Juli really knows her material and is very articulate,” Ms. Kenny said. “She has an excellent grasp of her research, even the finer details, and is quick on her feet when asked a question. Her poise and grace under pressure is really impressive.”

The Intel Science Talent Search is regarded as the nation’s premier high school science competition. Ms. Coroar is one of 300 semi-finalists. This year’s competition drew 1,839 entries from the top high school students in the country. Intel will announce on January 25 the names of the 40 finalists who will be invited to attend a final round of judging in Washington, DC, where they will also publicly display their projects at the National Academy of Sciences.

According to the Intel Science Talent Search, alumni of the competition “have made extraordinary contributions to science and hold more than 100 of the world’s most coveted science and math honors, including seven Nobel Prizes and four National Medals of Science.”

Ms. Coraor’s project is titled “The Impact of Compressive Misfit Strain on Improper Ferroelectricity in Lead Titanate/Strontium Titanate Superlattices.” She can discuss the topic and her research like people talk about the weather. The words just flow fast and furious in a display of someone who knows their material inside and out.

While the subject can be confusing for a layman, Ms. Coraor’s research has real world implications for both home and industry. Ferroelectric capacitors are used in everything from compressors, spa pumps, heat furnaces and air conditioners to electrical motors of all sorts and even ultrasound machines used in medical offices and hospitals.

Ms. Coraor has not yet finalized her college plans, but she is weighing Stony Brook University, Northwestern, the University of Chicago, Princeton and Cornell.

Academically, Ms. Coraor is near the top of Huntington’s Class of 2005. She has repeatedly earned honors in science competitions and gained the respect of the professional scientists and researches she’s worked alongside. Her mother, Hanna Nekavsil, is a professor at Stony Brook University and director of undergraduate studies for the department of geosciences.

According to the Intel Science Talent Search website, awarded prizes include:

• The second-place winner receives a $75,000 scholarship.

• The fourth-place winner receives a $40,000 scholarship.

• Sixth- through seventh-place winners each receive a $25,000 scholarship.

• The remaining 30 finalists receive a $7,500 scholarship.
Each finalist receives:

• An all-expenses-paid trip to Washington, DC.

• An opportunity to meet with government officials, including the president or vice president of the United States.

• A chance to interact with leading scientists and display science project research at the National Academy of Sciences.