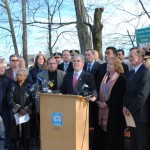 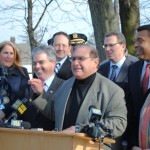 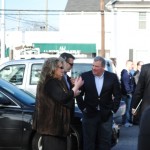 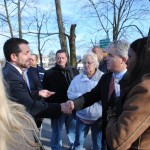 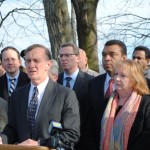 On Tuesday, January 24th, new County Executive Steve Bellone held a press conference outside St. Hugh of Lincoln church.  Choosing this location was significant because it is across the street from the most recent publicized violence in Huntington Station. County Executive Bellone showed up in Huntington Station with a plan after being in office for only a few weeks.  He showed up before the residents had time to wonder where he was.  This is a good first step in beginning to restore the confidence of the community.

The most notable and significant change presented by County Executive Bellone along with the County’s new acting Commissioner Edward Webber, is to return the gang units to the local precincts.  Bellone discussed the importance of having these highly trained anti-gang task force officers stationed locally. Bellone explained that if the gang units are away from local precincts there is no effective communication with the local patrol officers and the community. Bellone stated that he asked a police officer last year what interaction he had with the gang unit and the officers responce was “none, we have no interaction with the gang unit”.

Police Commissioner Webber clearly stated, “Gangs are a big problem in Suffolk County and it is one of the new administrations focal points”. He promised to create partnerships to fight gangs.  If we don’t get on this directly and efficiently, he explained, the problem will worsen for everyone.  He went on to explain that they will be implementing new concepts to fight gang problems.  There will be immediate and relentless follow up, promised Commissioner Webber.

Webber continued, “by disbanding the gang units to the precincts, they are going to bring a lot of experience and expertise to the precinct”.  In return, the local officers will provide knowledge of the local communities and help in identifying the gang members and other key people in the community.  “By exchanging this type of information, it will better enable us to fight the crime”, expressed Commissioner Webber.

Bellone stated, “we will be doing community policing, we will reestablish trust with the community. Bellone continued, “Commissioners will get the resources they need but they will be accountable for results.  Where we do not achieve results, we will make changes.”

County Legislator Browning, who serves the 3rd Legislative district, was introduced and described by Bellone as “understanding this issue better than anyone he knows”.  She described her experience of riding along with the gang units in her community. She explained there are 5 officers that cover a very large geographic area across Suffolk County. She recently asked one of the gang unit officers that serve her community,  “What happens if something happens in Huntington Station?  The officers response was “we leave.”  She continued relaying her conversation, “But what happens if my community needs you?”  she continued. According to Legislator Browning the officers response was “We are not there”.  Legislator Browning stated she is determined to crack down on gang violence, gun violence and drug violence.  “The only way to do this is by having the officers in the precincts”. said the Legislator.

Legislator William Spencer spoke about using the latest technology to assist officers.  He spoke of ways to take ShotSpotter to the next level. He discussed coordinating the ShotSpotter technology with the BID cameras. If you fire a gun the message goes to the officers.  The message can also go to the cameras, he explained. The cameras would turn and focus on the individuals.  If the cameras are made to communicate with ShotSpotter we are going to give our officers a big advantage.

Spencer stated that he recently learned that we have the software to make this happen and he is working on the next steps. “I want to send a very clear message” stated Spencer, “If you fire a gun in Huntington Station then you had better smile because you will be on camera and we will catch you”.

Frank Petrone reiterated that the gang units need to be in the community. “We pledge our full support,” stated Supervisor Petrone and he thanked Bellone for being a partner. Petrone discussed partnership with the County but did not make any specific mention of what the Town would bring to the table.  No mention of serious code enforcement efforts or disbursing Section 8 and other affordable housing more equitably throughout the Town.  Director of Code Enforcement Ken Lindhal was not present at the conference.

Bellone stated of the past County administration it was “an adminstration that wasn’t ready to recognize the issues and problems that existed here and put the resourses to partner with the county to make it work”.

Several times during the press conference  it was mentioned that it all starts in the County.  The County and police play a vital role but local policy and enforcement are key as well.  Bellone acknowledged that when he stated,”this fight can not be won with law enforcement alone.”

Bellone was asked by a reporter, “Do you think the Jack Abrams school should be reopened and what will you do to make it happen?” Bellone’s response was “What I think is shameful is that a school district felt the need to close a school because of law enforcement issues”.

While policing may have been part of the problem, many Huntington Station and School District 3 residents would attribute additional factors that contributed to the closing of Jack Abrams School. There are currently 5 unregulated homeless shelters in walking distance of the school.  A disportionate number of homes are non-owner occupied with obvious code and over-occupancy violations in close proximity of the school.  The vast majority of high density, affordable and section 8 housing are crammed into one small area of the immediate vicinity of jack Abrams.  The HHA that manages many of these properties are apparently not held accountable to any local authorities and have a limited knowledge of the problems at hand.  Recently Community Activist Matt Harris provided Robert Fonti, Town appointed director of the HHA,with a tour of the community surrounding the Jack Abrams vicinity.  Harris pointed out blatant violations such as a home with a “no Crack” sign in front of it as well as many other issues of concern such as single-family homes with multiple meters on them.  According to Matt Harris, Fonti seemed genuinely surprised by the things that were pointed out to him.  Fonti has been a Commissioner on the board of the Huntington Housing Authority since 1999.  He replaced William Spencer as the Chairman of the HHA.

We give credit to our new County Executive Bellone.  It appears that he is approaching his new position ready for action.  He seems to be interested in addressing and understanding the issues and he seems willing to make immediate changes to address our problems.  We hope his initiatives are successful.  So far what we have heard seems to be logical and a common sense approach.  We hope he has the courage to hold his fellow democrats accountable for their role in our situation including out current Supervisor Frank Petrone.  If Bellones’ desire to solve the problems for the residents of Huntington Station and the rest of our Township is stronger than his desire to behave like a good Huntington Democrat, we believe he will be successful.  Needless to say, we will be watching closely.