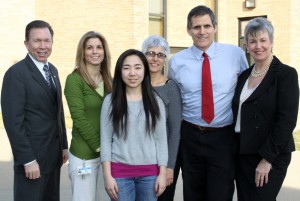 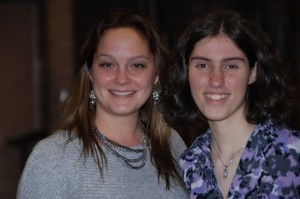 Two outstanding students from the Town of Huntington have been named finalists in the prestigious Intel Science Competition.  Juliana Coraor from the Huntington School District and Savina Kim from the Commack School District were informed on January 25th of the honor. Both School Districts are extremely proud to make this announcement.

Only forty students from across the country advance to this level.  Two of them are from Town of Huntington Schools. Finalists will gather in Washington, D.C., for a week in March, where they will meet and interact with leading scientists and national leaders. The finalists will display and explain their research at the National Academy of Sciences and undergo a rigorous judging process. The top winner receives a scholarship valued at $100,000.

“When I got the phone call last night,” Savina said, “my heart just skipped a beat. This is definitely an unexpected but incredible moment. All those hundreds of hours did pay off and now I have a few crazy months ahead, but I cannot wait!”

Savina’s project was named, “Cognitive Deficits in Neuropsychiatric Disorders: A Schizophrenia Model Associated with Neuronal Alpha7 Nicotinic Acetylcholine Receptor Localization.” Savina has an an intense interest in neurobiology and has conducted her research in a neurobiology lab at Stony Brook University for the past two years. Her work involved hundreds of hours in the lab doing intricate studies on receptors in the brain that are tied to neurological diseases such as autism and schizophrenia. Her study investigated how neurotransmitter receptors become produced and functional for activation. According to Savina, “Post-mortem studies have reported a significant decrease in these necessary receptors in brains of neuropsychiatric patients. Therefore, my study gives potential to developing novel strategies aimed at modifying receptor numbers by targeting small signaling pathways which allow it to function. Providing insight into these receptors can serve as a viable approach in designing new drugs to target the cognitive deficits in neuropsychiatric disorders.”

The entire Commack school community is in celebration mode and Superintendent of Schools Dr. Donald A. James was ecstatic when he heard the news. “We are all thrilled that Savina has been recognized as one of the most promising young scientists in the nation. I’m sure that the enormous dedication and countless hours spent on her research will one day greatly benefit individuals who are diagnosed with neurological diseases such as autism and schizophrenia.”

The Huntington School Board will honor Juliana Coraor and her teacher Lori Kenny during a public meeting of trustees on Monday, January 30 in the Jack Abrams School auditorium at 7:30 p.m.  Ms. Kenny heads Huntington’s science research program.

“This is such a proud moment for you, your family, your teachers and administrators and the entire Huntington school community,” Superintendent James W. Polansky wrote in a letter inviting Ms. Coraor to the January 30 meeting. “It is obvious that you possess unbridled passion for your work. This passion, along with your intellect, talents and extraordinary work ethic, will surely contribute to your ongoing achievement in post-secondary academia and beyond.”

“Savina is modest about her accomplishments,” said science teacher and research mentor Richard Kurtz. “All of us in the science department feel so fortunate to assist this young woman as she has developed her talents in science and as a great human being. She is a credit to the great work that goes on everyday in our district.”

Aside from her passion for science, Savina is the captain of Commack’s Girls Varsity Fencing Team, currently the number two team on Long Island. She has fenced in state and national competitions. She is also the managing editor of Commack’s High School Newspaper, The Courant. She is a talented cellist, and has performed in a variety of all-county orchestras. A role model for others, Savina also volunteers every Saturday at the LIJ Huntington Hospital “to help the patients, provide aide for the nurses, and understand the medical field.” She hopes to become a neurologist in the future.

Juliana is also described as modest. “Juli is conducting research that’s on a post-doctoral level,” Mrs. Kenny said. “Watching her is amazing. She is such a hard worker and has such a busy life, but she never shows any stress. She is simply remarkable.”

Coraor conducted her research in a lab at Stony Brook University, where she has also taken college classes as a high school student. Ms. Coraor stated, “I’ve been fortunate to have Mrs. Kenny supporting me and helping me every step of the way.”  She has really helped us build Huntington’s science research program.”

“The research I did for my project was conducted at the physics department of Stony Brook University as part of the Simons program, a summer research program for high school students that paired students up with professors in specific fields of science,” Ms. Coraor said. “I worked with Professor Matthew Dawber on ferroelectrics, which are materials with special electrical properties. I conducted this research from late June to early September. The summer was a tremendous experience, as I was able to work in an actual research group on a project that was mainly of my own design. I really have to thank my professor who has done so much to help me with my research and these competitions.”

“Juli really knows her material and is very articulate,” Ms. Kenny said. “She has an excellent grasp of her research, even the finer details, and is quick on her feet when asked a question. Her poise and grace under pressure is really impressive.” Ms. Coraor’s project is titled “The Impact of Compressive Misfit Strain on Improper Ferroelectricity in Lead Titanate/Strontium Titanate Superlattices.” She can discuss the topic and her research like people talk about the weather. The words just flow fast and furious in a display of someone who knows their material inside and out.

Ferroelectric capacitors are used in everything from compressors, spa pumps, heat furnaces and air conditioners to electrical motors of all sorts and even ultrasound machines used in medical offices and hospitals.

Ms. Coraor has not yet finalized her college plans, but she is weighing Stony Brook University, Northwestern, the University of Chicago, Princeton and Cornell.

Academically, Ms. Coraor is near the top of Huntington’s Class of 2005. She has repeatedly earned honors in science competitions and gained the respect of the professional scientists and researches she’s worked alongside. Her mother, Hanna Nekavsil, is a professor at Stony Brook University and director of undergraduate studies for the department of geosciences.

This achievement will open many new doors for both of these outstanding teens as they join the few elite that have been named finalists.  It is a testament to both the Huntington and Commack School districts that the foundations were set for these individuals.