At 7:25 pm Sunday two armed men attempted to rob RIA Check Cashing store at 1357 New York Avenue.  The men told the teller to “give them the cash”  by the suspect who did have a gun. The teller did not comply with his order because she had bullet proof glass.  The suspects ran out of the building fleeing south bound on New York Ave. 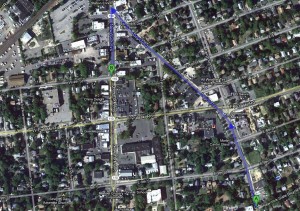 This is the third violent crime in little more than a week reported in Huntington Station.  On January 26 there was an armed robbery of a safe at gun point by three men at Chapi Deli at 139 West Hills Road. On February 4th Michael Fredericks was murdered at Los Compas Deli.  This most recent crime occurred less than 1/2 mile from Saturday’s murder.

Suffolk County Police Major Case Investigations Unit detectives are investigating the attempted armed robbery and are asking anyone with information about this incident to contact Crime Stoppers anonymously at 1-800-220-TIPS. All calls will remain confidential.