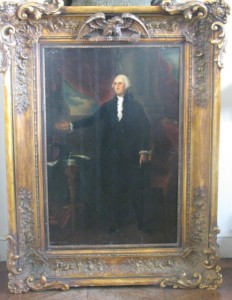 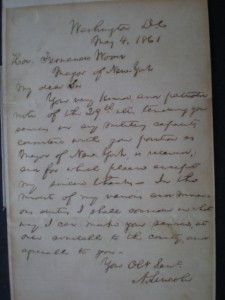 Just after the start of the Civil War in 1861, President Abraham Lincoln wrote a letter to Fernando Wood, then mayor of New York City, that is part of William K. Vanderbilt II’s extensive archives. To commemorate the February 20 Presidents’ Day holiday, the Suffolk County Vanderbilt Museum will display the Lincoln letter, as well as an oil portrait of George Washington—originally thought to have been created by the renowned American portraitist Gilbert Stuart—and an engraving of Washington by Justus Chevillet of Germany.

Fernando Wood wrote the letter to Lincoln shortly after the Fort Sumter attack, offering whatever military services he could provide, as mayor, to the President. Lincoln’s reply to Wood was in gratitude for his offer of assistance.

In the midst of my various and numerous other duties I shall consider in what way I can make your services at once available to the country, and agreeable to you –

Your Obt. [Obedient] Servant
A. Lincoln

Stephanie Gress, the Vanderbilt Museum’s director of curatorial affairs, said, “We do not know how this letter came to be in Mr. Vanderbilt’s possession. Perhaps it was originally the property of his great-grandfather, Cornelius Vanderbilt, who was an acquaintance of Mayor Wood, and it was passed down through the Vanderbilt family.” The value of the letter is unknown, Gress said.

In June of 2008, a representative of The Papers of Abraham Lincoln, a grant-funded project of the Illinois Historic Preservation Agency, visited the Vanderbilt archives to scan the letter for inclusion in its database. At the time, the representative noted that few letters have the original envelope in Lincoln’s hand, which makes the Vanderbilt’s document an exceptional Lincoln artifact. The Vanderbilt Museum is listed as a repository on the project’s website, www.papersofabrahamlincoln.org.

The Vanderbilt’s framed oil portrait of George Washington was believed to have been painted by Gilbert Stuart (1755-1828), widely considered to be one of America’s foremost portrait artists. He produced portraits of more than 1,000 people, including the first six Presidents of the United States. Stuart painted a number of Washington portraits. The most celebrated is known as the “Lansdowne” portrait (1796), and one large-scale version of it hangs in the East Room of the White House.

Stuart’s best-known work is an unfinished portrait of Washington begun in 1796 and sometimes called “The Athenaeum.” This image of Washington’s head and shoulders is a familiar one to Americans—it has appeared for more than a century on the U.S. one-dollar bill.

The Vanderbilt’s Washington portrait, found in the basement of the Suffolk County Welfare Department Home in Yaphank, was restored and presented to the Vanderbilt Museum in 1951. While the artist did not sign the work, a specialist reported that year that the painting was an authentic Gilbert Stuart. In 1981, however, two curators from the Metropolitan Museum of Art studied the portrait and advised the Board of Trustees that the work was not created by Stuart. As a result, the portrait, oil on panel and measuring 21.25 by 33.5 inches, is described in the archival records as “After Gilbert Stuart.”

The engraving of George Washington, by the French artist Michel Bounieu (1740-1814), is thought to have been made in the 1780s, is by Justus Chevillet (1729-1802), a German engraver. The portrait is one of the first likenesses of Washington to circulate in Europe.