The Dix Hills Fire Department responded to a crash on Saturday morning, February 18, at 6:45 a.m., on Deer Park Avenue 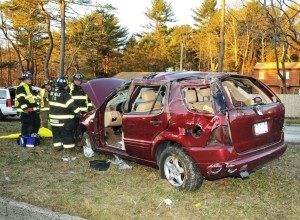 south of Vanderbilt Parkway in Dix Hills. The female driver of a Mercedes SUV that rolled over and landed upright in the center median, was extricated by firefighters using heavy rescue “Jaws of Life” tools to remove two doors. The patient was
airlifted to Stony Brook University Medical Center with traumatic injuries by Suffolk Police Medivac helicopter. 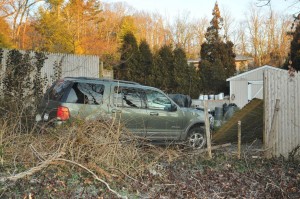 The second vehicle involved, a Ford Explorer, careened off the road and narrowly missed a house before crashing through a fence. The male driver suffered neck and back injuries and was transported to Huntington Hospital by the Dix Hills Rescue Squad. About 35 firefighters and rescue personnel were dispatched with three heavy rescue trucks, three ambulances, paramedic and first responder units, under the command of First Assistant Chief Tom Magno.