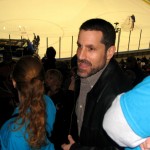 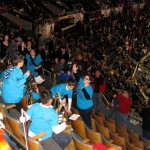 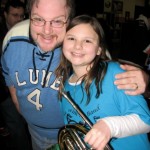 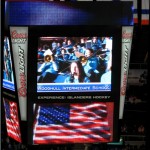 On Saturday, the Woodhull 6th grade band, under the direction of Chelsea Jablon, performed during an Islanders game at Nassau Coliseum. The students arrived over two hours ahead of game time in order to get their equipment together and set up. They got to see the Coliseum from the bottom to the top, since they had to stash their instruments down in the basement and then make their way to seats in the upper deck.

The band wore special commemorative t-shirts and occupied an entire section of that upper deck, under the watchful eyes of their chaperones. Surrounding them on both sides were more than a hundred of their family and friends, as well as a few notables from the school district. A few members of the school board were present, and James Polansky, our superintendent, came along as well to lend support.

A few hours were spent taking pictures, texting with friends and making trips to the concession stands, interrupted only occasionally by the noise of some hockey game that happened to be going on at the same time.

During the first intermission, the band played a hearty rendition of “God Bless America.” The Coliseum crowd came to its feet for the song and stood for a few minutes raucously applauded when it was over. The kids seemed rather comfortable with their new-found, though short-lived, celebrity status. The Islanders, no doubt inspired by the band’s performance and enthusiasm, went on to win the game.

The band stayed to the very end, cheering and chanting and having a heck of a time. The parents were mostly in awe, reliving our own Coliseum memories and watching our kids thoroughly enjoying a very special evening. And while many of us still cherish those memories, it’s our kids who can say that their band played the Coliseum…and brought the crowd to its feet.