The Arena Players Repertory Theater will open two dramas in March at the Suffolk County Vanderbilt Museum’s Carriage House Theater. A Steady Rain by Keith Huff will run March 2-25 and Stage Fright by Charles Marowitz will open March 30 and runs through April 22. Each will have three performances a week — at 8:00 p.m. on Friday and Saturday, 3:00 p.m. on Sunday. 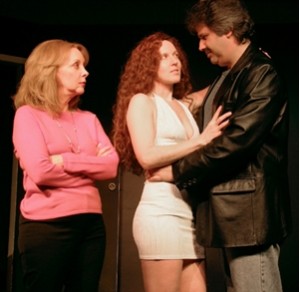 Fresh from Broadway, A Steady Rain, which starred Daniel Craig and Hugh Jackman, explores the complexities of a lifelong bond tainted by domestic affairs, violence and the rough streets of Chicago.
Joey and Denny have been best friends since kindergarten. After working together for several years as policemen in Chicago, they are practically family. Joey helps out with Denny’s wife and kids; Denny keeps Joey away from the bottle. But when a domestic disturbance call takes a turn for the worse, their friendship is put on the line. The result is a harrowing journey into a moral gray area where trust and loyalty struggle for survival against a sobering backdrop of pimps, prostitutes and criminal lowlifes.

In Stage Fright, a leading drama critic, notorious for his venomous reviews, is led by an attractive production assistant into a recently discovered nineteenth-century theatre. There, the critic plans to shoot footage for a documentary on the actor John Wilkes Booth, who once acted on those very boards. As soon as the critic downs a glass of wine, he falls, drugged and unconscious. When he awakens, he is firmly tied to a Shakespearean throne on the stage of the old theatre with an ominous woman intoning Lady Macbeth beside him.

Tickets are $20 on Friday and Sunday, $25 on Saturday. Reservations are highly suggested. To purchase tickets, please call the Arena Players at 516-293-0674. For more information: Visit ArenaPlayers.org. or facebook.com/ArenaPlayers.

The Vanderbilt Museum Carriage House is located at 180 Little Neck Road in Centerport, New York, and is accessible to the handicapped. Phone 631-854-5579.