Is Steve Israel Running Scared This Time? – Our Thoughts 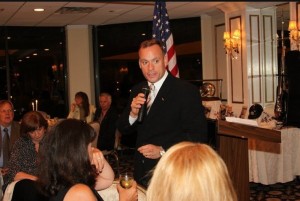 Recently Steve Israel sent out an e-mail blast requesting $5 from people because he stated that Congressional Candidate Stephen Labate was somehow picking on him.  When we read the e-mail it was evident to us what type of campaign Israel would be running.  Stephen Labate received the nomination only a few weeks ago and already the typical spin is coming out of the Israel camp.  Par for the couse but it still needs to be addressed.  What struck us first about the e-mail is that it starts “Tea Party backed candidate Stephen Labate.”  The word Tea Party is used to make implications in a district were the majority of registered voters are Democrats.

Until about a week ago, we knew nothing about candidate Labate.  One of our editors sat down with Mr. Labate for nearly 2 hours.  She met his wife and twin 5 year old children.  “Mr. Labate is a very qualified and likable candidate”, said Huntingtonian Editor Ilene Fucci.  “I look forward to sharing my interview with our readers.”  Ilene will be sharing the interview and the detailed background of the Labate family in the April print issue of The Huntingtonian. Israel and Labate have some very distinct differences.  That should be the point of the campaign, not personal attacks.   Below is the e-mail sent out by the Israel campaign and following it is the response from the Labate campaign.

From the Israel Campaign:
Recently, we found out that a Tea-Party backed candidate got the Republican nomination to run against Congressman Israel in the coming election. What we didn’t know was that our opponent isn’t running because of the issues or ideology – instead, for him, this is personal.
At a Republican gathering late last week, our opponent set the stage for an ugly, nasty campaign by saying things like: “I enjoy a good scrap…Steve Israel will have the fight taken to him like he’s never had before.” That’s not a policy disagreement, that’s personal.
Help Congressman Israel fight back! Chip in $5 today to our defense fund!
We can respect differing ideas and opinions, but politics shouldn’t be about personal vendettas. With rhetoric like this, there is no doubt our opponent has a personal problem with Congressman Israel, not just a differing idea of a future America: “Being the tip of the spear is exactly where I want to be…I never accept defeat. Steve Israel has no idea what’s coming toward him. I actually pity him.”
For our opponent, it’s not about real issues, like the GOP’s plan to destroy Medicare as we know it, or cutting back on things like the commuter tax credits that affect more than just middle class wallets in Long Island. He’s itching for a personal fight.
Congressman Israel isn’t going to just sit back and take it. Donate $5 today to help him fight back!
This election is about standing up for what’s right for Long Island. It’s about the future of the middle class and our country as a whole – things that move our country forward, not backwards.
There is no room here for personal attacks. With your help, we’ll be ready to fight back.

This is the response from the Labate Campaign:
Stephen Labate, a Republican running for Congress in the 2nd Congressional District, issued the following statement this week.

The battle for New York’s 2nd Congressional District has begun and so has the spin coming from the Israel Campaign. According to an email that was sent out by the Israel camp on February 21, it states that I have a “personal problem with Congressman Israel, not just a differing idea of a future America”.

The absurdity of that comment makes me wonder what exactly Mr. Israel is thinking. As a 20-year Military Veteran and a Field Grade Officer in the Army Reserve, I do consider myself a fighter, but for Congressman Israel to twist my enthusiasm for our upcoming contest as a personal affront to him, is bewildering.

The reality is that we hit a nerve and Congressman Israel is attempting to deflect attention away from an abysmal voting record which is propelling our country to the point of near insolvency. I believe all voters have a problem with elected officials who do not take personal responsibility for their actions. In Congressman Israel’s case, not only doesn’t he take responsibility for his actions, he blames others for the problems he and his voting record have brought upon our country.

Mr. Israel, the blame game and politics of self destruction must come to an end. As the Representative of New York’s 2nd Congressional District, I will not vilify opposing points of view, but will work on all sides of the political spectrum to bring jobs back to Long Island. This is what it means to represent the people of Long Island and it is something that has been sorely lacking on Long Island for a long time.

6 Responses to Is Steve Israel Running Scared This Time? – Our Thoughts