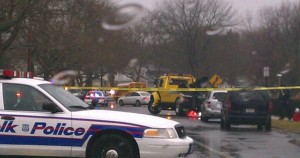 Khaja Antesham, 24, was driving a 2010 Honda eastbound on Wolf Hill Road when he lost control of the vehicle on a curved portion of the roadway by Saxon Avenue, and collided into a 2001 GMC mini-bus traveling westbound at approximately 2:45 p.m. Antesham, along with the driver of the mini-bus, Caroline Masten, 60, of Northport and her three passengers, ages 14-17 were all taken to Huntington Hospital via the Melville Fire Department.
The bus, owned by Huntington Coach, located at 1359 New York Ave., Huntington Station, was examined at the scene by the Motor Carrier Safety Section. The Honda was impounded for a safety check.Antesham, of 75 Irving Ave., Deer Park, was listed in critical condition with a broken neck, pelvis and head injuries. Masten, of Tudor Drive, Northport, sustained non-life threatening neck injuries and chest pains. The three teenagers sustained minor injuries.

Police need help with this investigation if you saw it, please call Second Squad detectives at 631-854-8252.