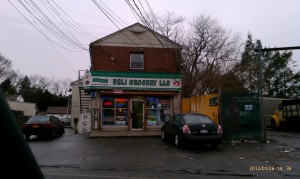 Four female employees were preparing to close the Health Mart Pharmacy, located at 5 Candlewood Road, at approximately 8:55 p.m. on February 28 when three masked men, all armed with handguns and wearing gloves, entered the business.  The suspects used zip ties to tie up the employees and took a large sum of cash from the store. Jewelry and cell phones were taken from employees, and a digital video recording machine used for surveillance was also stolen. No drugs were demanded or taken by the suspects during the robbery and none of the employees were injured.

This incident is consistent with the pattern of six other armed robberies occurring in the First, Second and Third Precincts since December 27, 2011.

Some of the men arrested were also responsible for robbing the following locations:

Investigations by First, Second, and Third Squad detectives, as well as from detectives from the Criminal Intelligence Section, led the detectives to a gray 2000 Ford Mustang.  A subsequent investigation led to the arrest of four occupants of the vehicle, and a fifth suspect in the previous robberies.  During the execution of a search warrant, weapons and proceeds from the Health Mart Pharmacy robbery were recovered.

Detectives ask anyone who may have information on any of these robberies to contact the Third Squad at 631-854-8352 or anonymously to Crime Stoppers at 1-800-220-TIPS. All calls will be kept confidential.