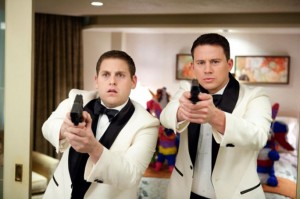 21 Jump Street sounds like a terrible idea on paper: a big screen adaptation of a mostly forgotten ABC TV series from the ‘80s. Was anyone really clamoring for that? Was there any reason to adapt that into a feature film in 2012? It sounds like just another example of Hollywood cashing in on an established franchise, akin to the decision to make a movie based on the board game Battleship. As it turns out 21 Jump Street is barely an adaptation and it isn’t just an excuse to capitalize on an old concept. Directors Phil Lord and Chris Miller, the team behind the brilliant and absurd Cloudy with a Chance of Meatballs, use the fact that nobody is too invested in the source material to their advantage, subverting all expectations for what a movie like this would be. The result is a smart, exciting and often hilarious action-comedy with real stakes and a surprising amount of heart.

Jonah Hill and Channing Tatum star as Schmidt and Jenko respectively, two rookie cops who went to high school together, though belonging to different social circles. Jenko was the popular jock while Schmidt was the unpopular nerd. When they realize each has something the other one needs, a friendship sparks and they become partners. After a failed drug bust, they’re reassigned to a special division when their police station decides to “revive a cancelled program from the ‘80s” (get it?). They’re sent to a local high school undercover as students to investigate and bring down a drug ring. Despite identical titles, I don’t know if we can even call this an adaptation of the show. While the TV show was primarily a drama, the film is essentially a satire of movies and shows like 21 Jump Street, fully aware of all of the clichés of its genre.

Writer Michael Bacall (Scott Pilgrim vs. The World) seems to have realized nobody really cared about a 21 Jump Street movie and instead decided to make something totally different. Early on, in a scene of dialogue that may as well have been delivered directly into the camera, a character explains that there aren’t any original ideas these days and so we’re stuck rehashing old concepts from the ‘80s to make a quick buck. In this way and many others, the movie is all about subverting your expectations. It’s anything but a lazy cash grab, taking everything you know about buddy cop films and turning it on its head. It embraces the stupidity of the concept too, by constantly acknowledging that Hill and Tatum are way too old to be posing as high school kids, or by having Ice Cube play the stereotypical black police captain from every ‘80s movie ever and then outright acknowledging that. In a hilarious early scene Schmidt and Jenko’s roles are reversed, with the jock forced to pose as the nerd and the nerd posing as the jock. 21 Jump Street thrives on the unexpected.

Many were initially unsure how Channing Tatum would perform, as he is an actor who has never headlined in any major comedies before. While Jonah Hill is without a doubt the star, having had tons of experience in films like Superbad and Knocked Up, Tatum does a fine job as well and the two actors have great chemistry together. In movies like this with two main leads, the rapport between them can make or break the film. With 21 Jump Street, it absolutely makes it.

That’s ultimately why the movie works as well as it does. Any successful comedy needs real stakes. Otherwise, it just feels like a series of Saturday Night Live sketches with no real purpose. A few years ago, Superbad was extremely successful not just for being a hilarious film, but for also having a believable high school friendship at its core. Similarly, 21 Jump Street works because the friendship between its protagonists feels real and as a result there are real emotional stakes to go along with the satire. Driving this silly, raunchy comedy is a truly interesting story about popularity and friendship in high school and about how you might act differently if you could go back to school as an adult. It’s easily the funniest comedy in well over a year, but it’s not just a vehicle for jokes: 21 Jump Street tells a great story, too.

Directors Phil Lord and Chris Miller previously worked on How I Met Your Mother, a series famous for its many running jokes. Cloudy with a Chance of Meatballs had its share of recurring gags as well and though they didn’t write it, Lord and Miller’s sense of humor carries over into 21 Jump Street. Nearly every gag has a setup and a payoff which comes in the third act, but the setup goes so unnoticed as to just feel like a natural part of the story. Not all the jokes work; there are a few duds here and there (strangely enough, most of the least funny gags are featured prominently in the trailer) and a few plot lines, like one with Ellie Kemper (The Office), don’t seem to get much of a resolution or really go anywhere. The last ten minutes or so also feel a bit cliché and predictable for a movie that prides itself on subverting the predictable. But most of the film is so confident and fast paced, it’s easy to look past the occasionally misstep.

Phil Lord and Chris Miller seem to love surprising us. As with Cloudy with a Chance of Meatballs, 21 Jump Street is a movie few expected to be great. Its brilliance lies in the fact that it knows all of your complaints ahead of time. Think it sounds like a cheap cash crab based on an ‘80s property? They make a joke about that. Think Jonah Hill and Channing Tatum are too old to play high school kids? They make a joke about that too. It’s extremely clever and always two steps ahead of the audience. But what really stands out about 21 Jump Street is that it’s not just an enjoyable and genuinely hilarious time at the theater, it also tells a genuinely interesting and emotionally compelling story, developing its characters in a way you probably wouldn’t anticipate from a raunchy high school comedy.