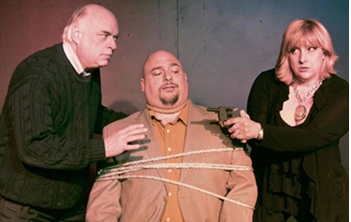 The Arena Players Repertory Theater will present Charles Marowitz’s Stage Fright at the Suffolk County Vanderbilt Museum’s Carriage House Theater, opening March 30 and running through April 22. Performances will be at 8:00 p.m. on Friday and Saturday, 3:00 p.m. on Sunday.

In this tale, a leading drama critic, notorious for his venomous reviews, is led by an attractive production assistant into a recently discovered nineteenth-century theatre. There, the critic plans to shoot footage for a documentary on the actor John Wilkes Booth, who once acted on those very boards. As soon as the critic downs a glass of wine, he falls, drugged and unconscious.

When he awakens, he is firmly tied to a Shakespearean throne on the stage of the old theatre with an ominous woman intoning Lady Macbeth beside him.

Tickets are $20 on Friday and Sunday, $25 on Saturday. Reservations are highly suggested. To purchase tickets, please call the Arena Players at 516-293-0674. For more information: Visit ArenaPlayers.org. or facebook.com/ArenaPlayers.

The Vanderbilt Museum Carriage House is located at 180 Little Neck Road in Centerport, NY, and is accessible to the handicapped. Phone 631-854-5579.