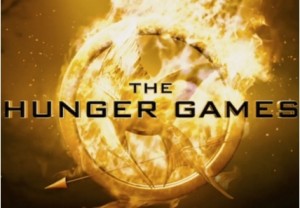 I think it’s important to judge The Hunger Games first and foremost as a movie rather than as an adaptation of the book. Fans who incessantly complain about every change that occurs from page to screen will have much to talk about in this film adaptation of the popular young adult novel, and already it seems most of the conversation has revolved around these changes. But putting aside the source material and judging just from what we have in front of us, I think The Hunger Games mostly works as a movie. It’s an interesting story about glorification of violence and the dominance of reality TV, carried by a very solid performance by Jennifer Lawrence as the fierce young hero, Katniss. Being the first in a planned trilogy it sets up a pretty compelling dystopian world and, while flawed, still has me looking forward to seeing the next installment.

The Hunger Games begins in Panem, a nation located in the ruins of what was once North America. The country is divided into 12 districts and ruled by the Capitol, an oppressive dictatorial government headed by men and women in bright clothing, heavy makeup and ridiculous hairdos. Ever since an attempted uprising, each of the districts is forced to partake in an annual event known as the Hunger Games as punishment for their rebellion. Every year children between the ages of 12 and 18 have their names submitted into a lottery and two from each district are picked at random. These 24 “tributes” are brought to the capitol city, where they’re gawked at by millions of viewers and judged mostly by their clothing and makeup. Before long they’re placed inside a large, man-made arena, equipped with whatever weapons they can manage to find and are forced to fight to the death. The games will end when only one contestant remains standing.

From the poverty stricken District 12 we follow sixteen-year-old Katniss Everdeen (Jennifer Lawrence), forced to leave her mother and sister to partake in the 74th annual Hunger Games, along with fellow District 12 contestant Peeta Mellark (Josh Hutcherson). From the beginning it’s clear the games are rigged. Winning depends not on sheer ability and survival instincts, but largely on obtaining sponsors who can purchase supplies for contestants. It’s all about making oneself as compelling and memorable of a character as possible, kind of like on actual reality television. In other words, it’s not really a fair fight. The capitol, who controls the environment of the arena and can add in hazards at their will, has the game set up for the sake of entertainment. Each of the 12 districts watch in horror, while the citizens of the capitol seemingly enjoy seeing these children slaughter each other. “They just want a good show,” one character notes. “That’s all they want.”

Writer and director Gary Ross does a great job of capturing the bleak nature of Suzanne Collins’ novel. This is especially effective during the early scenes of the dirt-poor District 12, which clash sharply with the images of the wealthy and oppressive Capitol later on. Once the games begin, there’s no shying away from the darkness that comes with a story about an involuntary fight to the death, though the characters at times don’t appear as physically damaged by the games as they realistically should be. But overall, the material isn’t cleaned up for the sake of appealing to a wider audience, and the violence is about as graphic as it needs to be, serving its purpose without being gratuitous. Some have complained the movie isn’t violent enough and should have been R-rated. I find it amusing that in response to a horrifying story about the glorification of violence on TV, fans are complaining that there isn’t enough gore.

The cast of The Hunger Games is its greatest strength, down to even the supporting characters. Small roles like Woody Harrelson’s Haymitch, Lenny Kravitz’s Cinna and Isabelle Fuhram’s Clove are perfectly cast and extremely memorable. Jennifer Lawrence’s performance carries the film and she does a great job of capturing why so many are drawn to Katniss. It’s refreshing to see a young female character whose personality isn’t based solely on her relationship with boys. And when was the last time we saw a big movie with a strong female protagonist do this well at the box office? Josh Hutcherson is fine as Peeta, Katniss’ fellow District 12 contestant and potential love interest, though he’s never really given enough time to prove himself to be as compelling as Katniss.

My main complaint with The Hunger Games comes down to its cinematography.  Director Garry Ross uses a large amount of handheld shots which get very distracting very quickly. Many key sequences are filmed in close up with the camera moving wildly back and forth, combined with extremely fast editing to the point where, at times, it’s hard to even discern what’s happening on screen. In theory, this technique should make us feel up close with Katniss like we’re there in the arena with her, and it should help to get across the frantic and dire nature of the games. Sometimes this does work effectively, as in the dreary first half hour in District 12, but later on it ends up making important scenes somewhat confusing, as I begged for Ross to stop shaking the camera so I could, for once, get a clear view of what was happening.

The pacing is also somewhat of an issue. At two and a half hours, it isn’t too slow; it’s actually a bit too fast. This may seem like an odd complaint. Wouldn’t you want the movie to be fast paced? Usually, yes. But at times it feels like not enough time is being taken to focus on one thing, instead just moving through a checklist of events that happened in the book. The pacing of the first hour is perfect and self-assured but once the games begin, we move from one set piece to another at such a rapid speed that it’s hard to stop and catch your breath. A few moments of Katniss trying to find water or to build shelter might have helped reinforce her struggle. There are also times when characters are introduced just a few minutes before they become important to the story. I wouldn’t have minded another half hour or so to help expand on some of these moments and make them ultimately more impactful. But then, those are the limitations that come with adapting a 400-page book to screen.

As with many first installments of a planned series, like the recent The Girl with the Dragon Tattoo, The Hunger Games struggles to find an ending and never really succeeds, instead finishing up practically in the middle of the action to advertise for a sequel. The cinematography is often too shaky and irritating, and at times the break neck speed can work against its storytelling. Ultimately though, I think the film does a pretty good job at what it’s trying to do. Fans of the book, if willing to overlook some changes here and there, should be pleased with this adaptation. For the uninitiated, I’d recommend the movie as an interesting, but flawed, glimpse into a well-crafted dystopian landscape. No, it’s no Harry Potter, but as far as movies aimed at teenagers go, I’m certainly pleased to see its huge success this weekend, and I look forward to seeing what’s to come in part two.