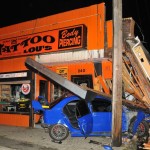 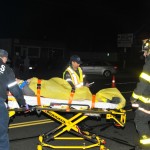 The Huntington Manor Fire Department, Huntington Community First Aid Squad and Suffolk Police responded to the scene of a two-car collision that sent a Mitsubishi sedan careening through the front of Tattoo Lou’s shop on East Jericho Turnpike near Engelke Avenue in Huntington Station, Saturday night, March 31, at about 9:45 p.m.  Four occupants from the vehicles involved suffered non-life-threatening injuries and were transported to Huntington Hospital by the first aid squad. Huntington Manor firefighters assisted in removing two occupants from the building that were not injured, however the building sustained significant structural damage. About 40 firefighters and EMS personnel were on the scene with two engines, two heavy rescue trucks and three ambulances.

One Response to Car Crashes through Tattoo Lou’s