Berland: Accuracy Not an Option?

Councilwoman Susan Berland has said on multiple occasions that she “told the people at Citizens for Huntington Code Enforcement group that Don Pius’ houses are legal, there is nothing we can do. She publicly claimed to worked with this group consistently to help the community”. To say that Berland is mistaken with these comments is an understatement. Apparently with Berland accuracy is not an option.

While you read the rest of this article remember that Don Pius gets more than $2 million in rent payments from the Huntington Housing Authority.  Remember he has received money from the CDA that was supposed to be used for struggling homeowners. Remember that he has received what we perceive to be well above market rate for his homes under Take Back the Block grants. Remember that what we perceive to be caused by over-occupancy violations, his homes cost the tax payers of HUFSD about 3.5 million dollars annually.

In December of 2010, Citizens for Huntington Code Enforcement group reported a (Pius owned) suspected illegal apartment complex (single family home) at 207 West Pulaski Rd. The apartment complex at this address has many meters, multiple phone/cable connections and the house is listed by the Town of Huntington as a “Single Family Year Round Residence”. The Town assigned it case # C104354.

In February of 2011, case # C104354 shows that  a meeting took place between Susan Berland and Public Safety. At this meeting the following was discussed:  Joe Rose inspector said this residence has 5 apartments, 5 adults, and 2 children along with commercial vehicle storage. The case is in court.

During the next meeting between Susan Berland and Public Safety  on April 14, 2011, the following update was given:  Civil Case Single family at least 6-7 apartments.

The Citizens for Huntington Code Enforcement group was in contact with National Grid who sent an inspector and they counted 6 meters and they expressed doubts that the wiring in the building was up to code. The Town should act on this issue immediately as peoples lives could be in danger if there were to be a fire. Don’t forget that according to Susan Berland, Don Pius owned houses are legal. Accuracy is not an option.

Public safety was contacted again in regards to this case in March 2012 and the Citizens for Huntington Code Enforcement group was told that the “Case is waiting to go to court”. The chronology so far is as follows:

The problem of overcrowding and illegal housing is not being addressed by the Town. Berland says there are no problems but for her accuracy is not an option.

The Town always says they are working on it, for once we would like them to say we finished something.

Here is another example, see if your untrained eye can figure out what is wrong:

Town Public Safety Officials in meetings with Citizens for Huntington Code Enforcement in April 2011 said the following about the property pictured below:

“There is nothing we can do. The structure is safe.” 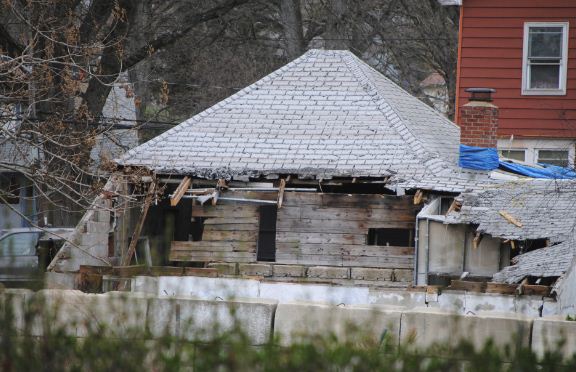