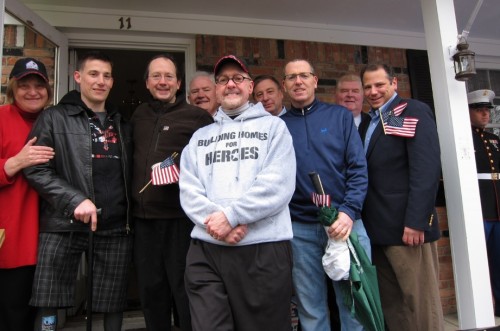 The Town of Huntington and Building Homes for Heroes have spent the past year raising funds and awareness and are now set to carry out major modifications and renovations to the house.

Neighbors, local Girl Scouts, Boy Scouts, Little Leagues, the Kiwanis Club, Fire Departments, Blue Star Mom’s, Veterans from WW2, Korea, Vietnam, and the first Gulf  War and current service men from the Marines and Coast Guard were on hand. A procession, led by the Marines, marched down Broadview to the Byler’s home, where they were met by Janet and Phil Byler and their son USMC 1st Lt. James Byler.

First Lieutenant Byler, a graduate of Huntington High School, was severely injured when he stepped on an improvised explosive device while leading his platoon on a dismounted patrol of a narrow alley in Northern Helmand Province, one of the deadliest provinces in Afghanistan. He was brought to safety by members of his platoon and was later awarded The Purple Heart. Byler lost both legs and fingers on each hand.

Renovations on the house are due to be completed by July 4th.

Building Homes for Heroes is a Long Island-based organization that supports the needs of our severely wounded soldiers and their families, with a goal to build or renovate homes for families in dire need. The organization is a public charity exempt from federal income tax under Section 501(c)(3) of the Internal Revenue Code.