April 3, 2012 5:42 am | Filed under: Huntington Union Free School District,News | Posted by: The Huntingtonian 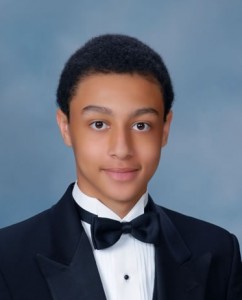 Jason Chisolm is a real go-getter. He’s a goal-oriented senior at Huntington High School with a keen mind, always learning, always stretching himself. The teenager has been called the “quintessential student” and has displayed a penchant for seeking out new opportunities and endless avenues for personal growth.

The Huntington High School community is a very diverse place. It’s a proverbial melting pot of cultures, races, religions and personalities. “Jason’s a young man who is able to work with all of the different groups equally well,” said Bernadette Walsh, the high school’s college counselor. “He is respected for his intelligence, his leadership ability, his talent and his warm and caring nature.”

Mr. Chisolm is headed to Vanderbilt University in Nashville, Tennessee next fall. “He is a competitive learner, consistently demonstrating a strong level of academic and personal commitment by enrolling in classes that have tested his confidence and heightened his senses,” Mrs. Walsh said. “With unwavering motivation and determination, Jason has excelled.”

No one can dispute Mr. Chisolm’s academic talents. He works hard and is certainly not coasting through his senior year. The teenager carefully considered various course offerings before registering for six Advanced Placement and one honors class this year.

Mrs. Walsh said the senior has an “enthusiasm for learning” and teachers would agree. “He craves a challenge,” the college counselor said. Mr. Chisolm has participated in summer enrichment programs at both Vanderbilt and Georgetown University and plans to pursue a career in neurology.

By the time he closes out his time at Huntington High School, Mr. Chisolm will have completed five accelerated science courses along with three years of participation in the high school’s science research program. “Unfortunately, due to scheduling conflicts, Jason was unable to continue with his research class this year,” Mrs. Walsh said. “This decision was a difficult one for Jason to make as he was intent on enrolling in the capstone AP courses in each discipline, including AP Studio Art 2D but he longed to continue with the research course.”

Mr. Chisolm has served as president of the school’s Science Honor Society chapter and vice-president of the science research club and seems well-prepared for the college-level studies that await him in the fall.

A well-rounded young man, Mr. Chisolm is a highly visible and respected senior. He has been a mainstay on the Blue Devil fencing team and has even captained the squad.

“Jason is conscientious and sensitive to those around him,” said Mrs. Walsh, who worked closely with the teenager during the college application process. “He is a genuine young man who is respectful of himself and others.”

As Mr. Chisolm heads towards the June commencement exercises, he continues to soak up as much as he can from courses, while looking forward to what awaits him at Vanderbilt University.