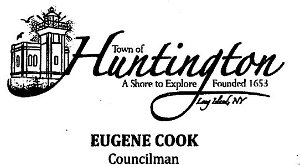 I am a newly elected Councilman in the Town of Huntington, Suffolk.

Upon taking office, it was brought to my attention that the procedure, handling or protocol for dealing with public funds by the Town may be lacking in different areas; that led me to ask some questions causing a sequence of events to occur which called my attention to and made me uncomfortable with, the Town’s Comptroller’s Office.

I have held my elected position since January but from day one I have been blocked from access to the Town’s financial information, books and records. One of my first requests, which was made to the Town Comptroller, was to grant me access to review the Munis software system; which contains the financial transactions of the Town’s financial accounts. The response that I received was that, it is not protocol for an Elected Official to have access and if I was given access to it, I wouldn’t understand the system so there was no need for the access. This is the first situation that raised a red flag and made me question the possible lack of transparency with the Comptroller.

My concerns were further heightened when an email was brought to my attention, showing the Comptroller requesting a member of her staff to complete an online webinar due to the fact that she would be in jury duty. The employee was uncomfortable with this due to the fact that the employee would be taking the course and the Comptroller, who is a CPA, would be getting credit for this course and be earning CPE credits.

I have no idea if the Comptroller would have used these CPE credit towards her CPA requirements, and I am certainly not accusing her of anything other than a lack of good judgment, by putting a subordinate employee in a position to act illegally spoke volumes to me in regards to the character and integrity that was involved in this request.

I have also, questioned various referendums that have been proposed regarding revisions to the Town’s 2011 budget spending, and subsequently upon personal inspection, I believe we have a serious lack of controls in various Town Departments.

Following my heightened concern regarding spending and controls, I sent a request to our Town Attorney’s office to draft a resolution to hire an outside independent auditor to review the books. One week later I received a response from him and within a few days of his response the Town Comptroller submitted her resignation, to take effect on April 20, 2012. The next day, I immediately requested a meeting with our Internal Auditor and the Comptroller, who the day before had submitted her resignation, would not permit the Town’s Internal Auditor to meet with me without her being present. This is suspicious behavior in any environment.

As a private businessman I require complete transparency and cooperation from all personnel handling my business matters and believe it to be my moral and fiduciary responsibility to require nothing less of myself as an elected official. I am concerned for our Town and for all of the great people in the Town who are attempting to make informed, responsible decisions.

I respectfully request that the Office of the State Comptroller perform an audit of the books of the Town of Huntington. I believe, and hereby request that an audit be initiated immediately, especially in light of the sudden departure of the Town Comptroller. It is my understanding that it has been well over a decade since an audit has taken place and I have also enclosed letters from the Superintendent of Highways, who it appears has previously requested this.

In consideration of recent events, and with attention called to the fact that it appears the Comptroller has sole access and control of the Town’s software and recordkeeping of our approximately $200,000,000 budget accounts, I question whether it is even appropriate for the Town Comptroller to retain that power until her resignation goes into effect in four weeks.

I would appreciate your immediate response and will make my staff and myself available to you with any questions you may have or assistance we can offer.