Hall of Fishes, Opened in 1922, was the beginning of Mr. Vanderbilt’s Museum. 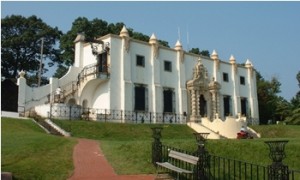 In 1910, the explorer, adventurer and railroad heir William K. Vanderbilt II bought 20 acres on a beautiful rolling hilltop above Northport Bay. He hired the renowned architects Warren & Wetmore to design and build a bachelor’s bungalow that was the beginning of his Eagle’s Nest mansion and estate.

In 1922, Warren & Wetmore designed and built a marine museum called The Hall of Fishes. This year marks the 90th anniversary of The Hall of Fishes — the first of Mr. Vanderbilt’s collections to be exhibited in a gallery — which he opened on a limited basis to the public (one day each week and by appointment) and would later expand to become the Vanderbilt Museum.

Mr. Vanderbilt was passionate about the oceans. Over the decades, in various large yachts, he explored the seas of the world and collected thousands of specimens of marine life. The marine museum, with its astonishing variety of sea life, is an integral part of the Vanderbilt Museum’s education programs, which bring more than 50,000 regional schoolchildren to the institution each year. 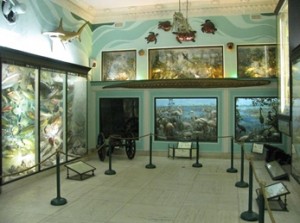 Stephanie Gress, director of curatorial services, said that the Vanderbilt collection contains more than 900 marine invertebrates and 2,450 fish, both dry and in fluid (not all on display).  In addition, Mr. Vanderbilt’s natural-history collections include 77 reptiles and amphibians, 9,800 shells and corals, more than 1,400 butterflies, moths and insects, 569 birds and, including specimens in the animal habitats, 109 mammals. His ethnographic collection contains 658 artifacts from the cultures of Africa and the South Pacific.

“In the beginning,” Gress said, “The Hall of Fishes was the Vanderbilt Museum. “In addition to exhibiting sea life, it also displayed the mounted animal heads from Mr. Vanderbilt’s hunting trips, his ethnographic artifacts and marine paintings, and the Egyptian mummy.” She added that the original one-story building was expanded to two floors in the late 1920s to accommodate the growing Vanderbilt collections. The Memorial Wing, opened in 1936, marked the expansion of the museum into the Vanderbilt mansion.

Mr. Vanderbilt began his ocean journeys in 1908, aboard the Tarantula, and in 1920 on the Genesee, steaming along the East Coast, then to Cuba and the West Indies. In 1922, he collected Atlantic specimens from the deck of the Eagle in the waters off Miami. Aboard the 236-foot Ara, he traveled from New England to the West Indies in 1923. He first explored the Galapagos Islands off South America in 1926, a round trip of 15,000 miles. From October 1928 to May 1929, he completed his first circumnavigation of the globe in the Ara and chronicled it in his book, Taking One’s Own Ship Around the World.

From July 7, 1931, to March 4, 1932, Mr. Vanderbilt completed his second circumnavigation of the earth in his new 264-foot Alva. During that journey, he collected marine life from every ocean. Among the amazing creatures he brought home to the Hall of Fishes were huge sea turtles, giant ocean sunfish, sharks, a whale, sea snakes and an enormous manta ray. He privately published an account of that monumental adventure, titled West Made East with the Loss of a Day. At the time, some of his finds were new scientific discoveries. Working with scientists from the American Museum of Natural History, Mr. Vanderbilt catalogued his specimens and, from 1928 to 1938, published the Bulletin of the Vanderbilt Marine Museum.