It Just Ain’t So…

April 11, 2012 9:40 am | Filed under: Around Town,Code Enforcement,Investigations,News | Posted by: The Huntingtonian

In a recent article in the Long Islander Newspaper, Joan Cergol, who is on the EDC and Special Assistant to Supervisor Frank Petrone, discussed how Huntington Station is Rising Again.  She ended the article by stating, “when all is said and done, we can finally leave 1960’s Urban Renewal at the curb.”  The entire article is intentionally misleading.  We have a different idea of what “should be left at the curb.”

Town representatives need to stop rewriting history, misleading the public and shutting residents out of the process. Ms. Cergol speaks about how “thrilled” she is that the public is “finally” interested in the welfare of Huntington Station.  According to Ms. Cergol up until recently you could only get 20 – 30 people to show up to a meeting.  The first problem with that statement is that the latest “market conditions study” or what we call the Brownfield Report that cost the tax payers $100,000 was intentionally kept a secret from the public.  If they were really interested in having input from the residents, it may have helped to let the residents know it existed.

In the Long Islander article, Ms. Cergol makes the following statement, “When I first started working with the Supervisor on his Huntington Station agenda, we were lucky to get 20 – 30 people in a room to offer input.  With the town’s formation of the Huntington Station B.I.D. in 2003, the circle of special interest expanded into the business sector, but it was not enough to achieve the widespread community-based traction needed to move mountains.  This is no longer our problem.”

The pictures below are also from the Long Islander from an April 22, 2002 meeting regarding another Huntington Station plan that the vast majority of residents expressed extreme displeasure with.  According to varying eye-witness reports, it is estimated that there were between 1000 and 2000 people in attendance.  It is days away from the 10 year anniversary of the Fox Fowel revitalization meeting and our Town Supervisor and his supporters are still playing wack-a-mole with the residents. 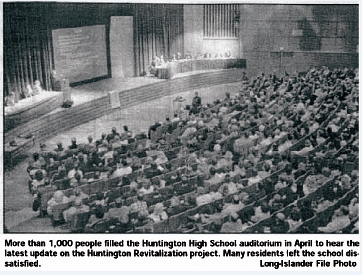 The caption on the 2002 photo above: More than 1000 people filled the Huntington High School auditorium in April to hear the latest update on the Huntington Revitalization project.  Many residents left the school dissatisfied.

2 Responses to It Just Ain’t So…