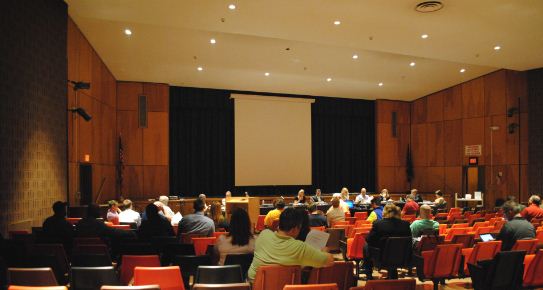 Huntington School Board members unanimously adopted a budget to fund district operations during the 2012/13 school year and placed it and a separate capital reserve fund proposition on the ballot for Tuesday, May 15. Three trustee seats will also be up for grabs that day.

“We believe this budget to be fiscally responsible and educationally sound,” said Emily Rogan, Huntington School Board president. “Huntington has a long history of excellence in education and the coming year will be no exception.”

The district cut more than $860,000 during the budget development process, mainly through staffing efficiencies. While the district expects to receive $702,000 more in state aid next year, it is also planning for a drop of $300,000 in assessed valuation, which translates into a loss of about $640,000 in tax revenue.

The adopted budget allows for the purchase 430 desktop computers and 150 printers for use in all four primary school buildings and the Woodhull School computer lab. “With the need to remain competitive in an ever-changing technological world, this budget funds the first phase of a four-year technology plan, replacing outdated computers and hardware, so that our teachers can increasingly incorporate technology within their instruction plans,” Mrs. Rogan said.

A separate capital projects referendum will also be on the ballot. If passed, it will allow for an estimated $2.299 million worth of work in every school building in the district. The district currently has $5,309,967 available for such work in the capital reserve fund. Passage of the May 15 proposition will not increase taxes.

Capital reserve fund monies can only be used for renovation and reconstruction projects as authorized by voters. The balance in the fund represenst dollars already provided to the district by taxpayers that because of tight fiscal management and economizing, weren’t needed to pay for regular school operations. The source of the funding is the annual transfer of surplus monies from the district’s general fund.