Bellone Talks About Need to Lead by Example 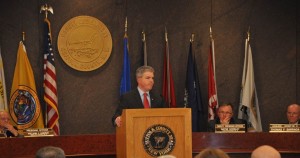 On the heels of a report that Suffolk County ended 2011 in deficit for the first time in two decades, Suffolk County Executive Steve Bellone talked about the need to address the fiscal crisis in his first State of the County speech.

In addition to discussing the need to pass his $160 million deficit mitigation package, Bellone specifically talked about the need to lead by example, stating in the speech, “I am a big believer that leadership must come from the top and that the best way to lead is by example.  I will not ask others to make sacrifices or to do more with less without being willing to do so myself.”

Speaking about health insurance, Bellone said, “For most residents of Suffolk County, paying into health care is not a sacrifice, it is a fact of life.  And most residents have been scraping by, fighting to make ends meet and paying rising taxes with stagnant wages or fixed incomes.  Government cannot be immune to the challenges taxpayers face.”

Bellone has voluntarily reduced his salary by $21,000 a year and $4,000 less than the prior County Executive made last year.  He and his senior management team have agreed to freeze their salaries through the end of 2013 for a savings of $100,000.  If all Suffolk County employee’s salaries were frozen through 2013, it would reduce the deficit by $23.8 million.

Bellone has refused to accept a taxpayer financed car or driver, instead he uses his 2007 Ford Escape to drive himself around Suffolk County.  He announced that he will be auctioning off two of the seven cars assigned to the County Executive’s office including a Crown Victoria.  He will be reassigning three of the remaining vehicles for more important uses, making them available to Child Protective Services caseworkers to use in the field.

In the speech, Bellone noted that he is focused on addressing the County’s fiscal crisis as well as the need to create jobs.  He thanked the Suffolk County Legislature for giving him the resources to create a Performance Management team which is working to make government more efficient as well as an enhanced Economic Development and Planning Department.

Bellone talked about the importance of reestablishing Suffolk County’s relationship with New York State.  Bellone said in the speech, “Just as I promised I would do, we have reestablished a positive relationship with New York State.  After years of Suffolk County fighting with the state and our taxpayers losing, we have worked with our Senate and Assembly delegations and Governor Andrew Cuomo to deliver real results for Suffolk County taxpayers.”  Successes include:

Bellone concluded, “The county faces challenges, but we also stand united to meet them.  We are facing the greatest fiscal crisis in our county’s history, yet we have assets that would be the envy of any county in the nation.  I see great things in our future.  You should know that what motivates me every day is what we can do to build a better future for our families.  Despite the problems, despite the difficulties that we face today, trust me when I tell you that the future of Suffolk County is bright.”