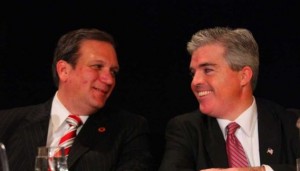 Suffolk and Nassau Counties together stand to save more than $1 million this year as a result of a cooperative bid for the purchase of wastewater treatment and pool chemicals – the second in a series of cooperative purchases under the Long Island Intergovernmental Purchasing Council (LIPC), County Executives Steve Bellone and Edward P. Mangano announced today.

Other members of the LIPC that participated in the bulk bid expect to save thousands of dollars on their chemical purchases. The Town of Oyster Bay, a founding member of the LIPC, anticipates a saving of approximately $25,000; and thousands more for the Village of Sands Point, the Village of Patchogue and five Nassau water districts (Glen Cove, Jericho, Oyster Bay, Massapequa and South Farmingdale) that participated.

“Joint purchasing is an example of where we can do more with less by finding efficiency,” said County Executive Bellone.  “We were able to save more than $1 million for Long Island taxpayers without having any impact on services.”

“Cooperation among the various governmental entities is key to reigning in spending and holding the line on taxes,” said County Executive Mangano. “I applaud those agencies that joined us on this latest cost-saving initiative.”

“It goes to show that by municipalities, school districts, fire and other special districts working together, they can leverage their aggregate purchasing power to get the volume price benefits for the goods and services we all need, “said Town of Oyster Bay Supervisor John Venditto. “With new members continuing to join the consortium, I look forward to even more cost savings in the future.”

The LIPC issued a bid that included Sodium Hypochlorite, Sodium Hydroxide (Caustic-Soda) and Calcium Hypochlorite. Nassau alone uses approximately 4 million gallons of Sodium Hypochlorite at its two sewage treatment plants- Bay Park & Cedar Creek – and about 30,000 gallons a year at various county pools for a TOTAL cost of more than $10 million between 2009 and 2011.

In 2012, the counties, towns and water districts will enjoy savings of between 37 and 74 cents per gallon of Sodium Hypochlorite and Sodium Hydroxide.

Suffolk County projects savings of $526,830 this year for the same two chemicals. The bulk of the chemicals used by the County are at Sewage Treatments Plants in Selden, Holbrook and Medford.

Nassau County expects to save about $600,946 on these chemicals this year. In addition to the two sewer treatment plants, Nassau County uses thousands of gallons of chemicals for its pools located in Cantiague Park, Nickerson Beach, Christopher Morley Park, North Woodmere Park, and Wantagh Park.

The contract will be posted on the LIPC website: lipurchasingcouncil.org/home.aspx and is for use only by LIPC members.  The next bulk-purchase bid to be advertised will be for 300 EMS medical supplies used by both counties and many of the Island’s volunteer fire departments.

For more information on how to become a member of the LIPC, municipalities should visit: http://www.lipurchasingcouncil.org/home.aspx

Story by Vanessa B. Streeter, Office of county Executive Bellone