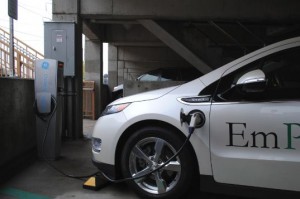 The charging station not only encourages residents to purchase and use electric cars by giving them a place to charge the vehicles while they are at work, it is energy neutral. The electricity consumed by the cars is offset by the electricity produced by solar panels installed on the roof of the Town-owned parking garage as part of the project, so, in essence, the vehicles are powered by the sun. 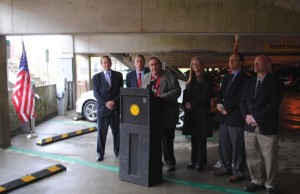 “With Earth Day having been celebrated recently, this is a fitting time to open the latest example of the Town’s commitment to the environment and to clean, sustainable energy,” ‘Supervisor Petrone said. “This pilot project will demonstrate that electric vehicles are a practical option for commuters and increase awareness of the potential of renewable energy and its application.

“Buying electric cars are one way people can respond to the high cost of gasoline and reduce our dependence on foreign oil,” Councilman Cuthbertson said. “This charging station should help answer one of the major questions in buying an electric powered car: how, where and when can I charge it?”

The project’s cost was $138,500, for both the charging station and the solar panels. Of that, $104,000 is from federal stimulus funds in a competitive program administered by the New York State Energy Research and Development Authority. The remaining money came from the Town’s Environmental, Open Space and Parks Improvement (EOSPA) green projects program.

Currently, the charging station is available on a first-come, first serve basis. If the Town finds that the demand is greater, the Town will put together a schedule allocating the spaces fairly. 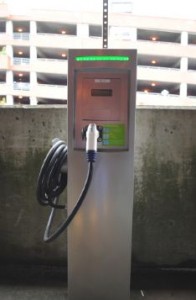 Right now, the charging station is free. The Town may reassess whether to charge for the service, based on demand. “This charging station is another benefit the Town provides for owners of hybrid and alternative fuel vehicles as a further example of our commitment to the environment, keeping our water clean and improving the air we breathe,” Councilwoman Susan Berland said. To use the charging station, residents need to obtain a Hybrid/Alternative Fuel Parking Permit from the Town Clerk’s office. The permit, which is free, also allows residents to park at Town beaches and at metered parking areas throughout the Town, except for the incorporated village of Northport.

“This charging station should help give new meaning to the term “station car:” Instead of the polluting junker on its last legs, it will become the state-of-the-art, sustainable transporter,” said Councilman Mark Mayoka.

Other examples of the Town’s commitment to alternative energy sources are the demonstration solar energy project at Town Hall and the conversion of all garbage trucks, both Town-owned and private carters, to compressed natural gas. The Town has several hybrid and alternative fuel vehicles, including a street lighting truck, and last year also put into service three hybrid buses on its HART system. “All of these initiatives help reduce energy costs and save taxpayers money,” said Councilman Eugene Cook.

“Supervisor Petrone and the Town of Huntington are leading the way in promoting solar energy projects that help reduce our dependency on foreign oil while providing significant environmental benefits,” said David G. Schieren, CEO of EmPower Solar, which installed the charging station. “This commitment by the Town confirms the viability of solar power as the growing and dominant energy technology of the 21st century.” 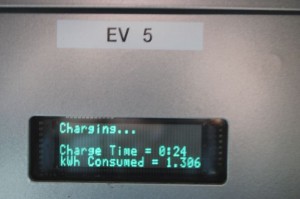 “Electric vehicles offer a cleaner alternative to combustion engines, helping to reduce the consumption of fossil fuels and the emission of greenhouse gases,” said Francis J. Murray Jr., President and CEO of NYSERDA. “NYSERDA is pleased to partner with the Town of Huntington to fund five EV charging stations at Huntington Station and help promote electric vehicle use among commuters.”