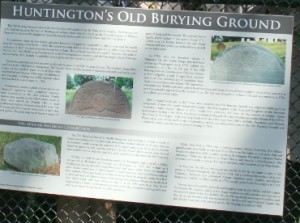 Representatives from the Town’s African-American Historic Designation Council and Historic Preservation Commission and the Huntington Historical Society, recently unveiled a new interpretive marker at the Old Burying Ground, one of the most historic and sacred sites in the Town.  They were joined by members of the Town Council.

Located on Main Street in Huntington Village, the Old Burying Ground, is listed on the National Register of Historic Places and is also a locally designated historic landmark, within the Old Town Hall Historic District.  Over the course of 300 years, from the first European settlement of the town in the mid-seventeenth century until 1957, as many as 6,000 to 8,000 people may have been buried there. Only 1,250 markers remain. During the American Revolution, British troops built a fort at the top, damaging many of the gravestones.

After it ceased to be used as the Town’s main cemetery, the Old Burying Ground was neglected, resulting in an overgrowth of trees that caused widespread damage.  The local chapters of the Sons and Daughters of the American Revolution began cleanup efforts in 1911. The Town assumed regular maintenance starting in the 1920s.

Vandalism increased during and after the suburban population boom of the 1950s. The Town, with matching funds from the New York State Office of Parks, Recreation and Historic Preservation, committed itself to the conservation, restoration and preservation of the Old Burying Ground and undertook a multi-year restoration project starting in 2004.

Beginning in 2010, the Town’s African American Historic Designation Council has sponsored semi-annual tours of the burying ground highlighting the African American aspect of its history.  It is estimated that about four hundred African Americans, whose graves are interspersed evenly among the majority of European Americans, are buried here. That includes the first recorded African American resident of Huntington, who was enslaved in Africa, brought to Huntington in 1657 and died in 1690.  As an outgrowth of those tours, the AAHDC suggested the Town place a detailed historic marker at the site to explain its history.

The marker describes the history of the Old Burying Ground and includes a section entitled, The African American Connection.