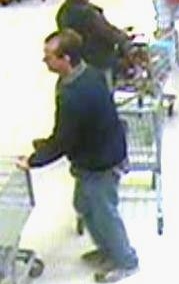 On April 6, 2012, at approximately 10:30 AM, an unknown white male approached the deli counter at the King Kullen supermarket located at 50 New York Avenue in Huntington and took a wallet that was left on the child seat of a shopping cart by a female shopper. The woman immediately realized what happened and she ran after the thief. When they reached the exit, the suspect dropped the wallet and fled. He was seen leaving the parking lot of the store in a white pick-up truck.

The suspect appeared to be in his 40s and he had brown hair. He was wearing a dark blue jacket with a grey collar, a plaid shirt, jeans and sneakers.