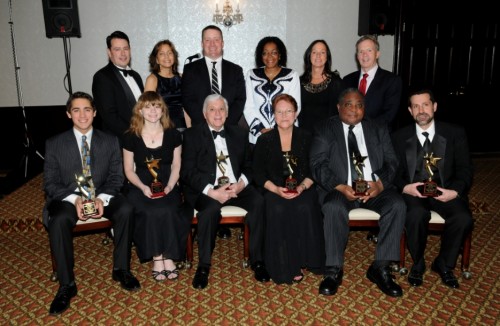 On Saturday evening, April 21, 2012, at the Huntington Crescent Club, I was one of seven Honorees of the Greater H.O.P.E. (Huntington’s Organizations, People & Places of Excellence) Awards, presented by the Greater Huntington Civic Group Inc. I was presented by my wife, Rev. Glorious Artis, who kept this a surprise along with my parishioner, Darleen Washington as well as members of the Civic Group who orchestrated this pleasant surprise. The people there were great and gracious. I was honored to be seated with another Honoree, Marta Negron Smith and her husband Bill, John and Jenifer LaVertu, members Of the Greater Huntington Civic Group Board, Huntington Town Board member, Gene Cook and his wife, and his assistant.

We honorees each received a beautiful trophy, as well as a citation from the New York Assembly, presented by Assemblyman James Conte, and a Certificate of Distinction from Suffolk County Legislator, Dr. William Spencer. Most of all, we were Honored by those who came to encourage us, and those who desired to come, but could not. We were thankful for the encouraging remarks from our Town Supervisor Frank Petrone, who was in attendance. It was a wonderful experience, an evening to remember.

Truly I thank the Greater Huntington Civic Group for their consideration, and for all they do under the strong leadership of their president, Steven Spucces, to make this community the best it can be. I am a proud member, and encourage all who want to make a positive difference to consider joining.

I remember looking at the culinary menu for the evening, and reflecting on the human menu of honorees and wonderful people there. I reflected on the variety of people, different sectors of our Town, the diversity, the individualities, that were united this evening for a common cause, the cause of making Huntington the greatest town of all! This menu included God, represented by myself and other clergy including my wife who presented me, Education, represented by fellow honoree, James Polansky the very innovative and dynamic Superintendant of Schools of district #3, himself Presented by none other than Elizabeth Black, a friend and a multitalented trustee of the school board. There was Juli Coraor, a Huntington High School senior, who was named a semi-finalist in the National Intel Science Talent Search Contest, one of three excellent Huntington High School students honored, whom I believe is just the beginning of many accolades to come for these talented and blessed students. She was presented by another trustee of the school board who believes in excellence, Richard McGrath. There was Megan Hansen, a Huntington High School junior, Who conducted breast cancer research in Boston and created a cancer-prevention program aimed at middle school students. There was Josh Solomowitz, also a junior, who conducted breast cancer research at the Fox Chase Center in Philadelphia, both were presented by Lisa Kratter, Students &   Scientists Program Coordinator, whom I never met previously, but these youth bear witness to her great leadership, as well as the leadership of the school and district as a whole. We stood as one to show our pride in these great students. There was Marta Negron Smith, a leader of the Latin Task Force and Clergy Task Force, who through her great, yet humble strength of Character supports revitalization efforts of the Latin community. There was Alfred Sforza, D.D.S. lifelong resident, historian and author who has preserved Huntington’s past in an effort to educate present and future citizens and decision makers about this special area. We were all educated and touched by his presentation about the past beauty of Huntington, that was lost. Hopefully we won’t make this mistake again. He was presented by Michael Goldstein, a Huntington Station Resident. Marta Smith was presented by John LaVertu, lifelong Huntington resident.

We were blessed by the wonderful voice of a young lady, Honor Corbly.

Thinking about this wonderful menu, of which I am humbled. I loved that there were seven of us, the number seven being one of God’s numbers of completion.

Just think, the menu doesn’t end there! This was the menu for this evening. We have so many other menus such as teachers, parents, police, medical personnel, veterans, mentors, everyday people, and most of all our children, who are our greatest treasure.

May there be many more times like this, and may we all be a part of the menu.