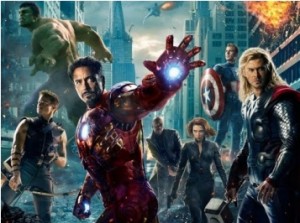 The Avengers, the newest superhero film from Marvel which made over $200 million at the box office this weekend, is an example of a pretty risky experiment paying off better than anyone ever expected. Since 2008, the studio has been slowly building up a universe of interconnected films with Iron Man, The Incredible Hulk, Iron Man 2, Thor and Captain America. The idea was that after each hero had his origin story told individually, they would team up to fight side by side in the ultimate summer blockbuster: The Avengers. This concept of a series of stand alone films, with a huge amount of mythology, slowly building up into a sixth film is something we’ve never really seen before, and there were two obvious concerns. One, would the team-up film be accessible to those audiences who hadn’t seen each and every previous installment? And two, how could any movie possibly live up to that much hype? If, after four years of build up, The Avengers was not clearly the best of the entire series, it would seem like the whole ordeal was a complete waste of time. Thankfully, Marvel had a secret weapon: writer/director Joss Whedon, who has crafted a movie which doesn’t only meet all the hype it has generated for itself, but in some fields exceeds it. The result is a truly great superhero film that, by its final action set piece, has completely validated Marvel’s experiment and which is, without any doubt, the best of the series.

Picking up directly after the events of Thor and Captain America, The Avengers begins as Loki (Tom Hiddleston), a god hailing from the realm of Asgard, has come to Earth with a plan for world domination. After being upstaged and defeated by Thor, he has returned to exert his status as a higher being onto the human race. Loki has recovered the tesseract, a glowing blue cube with almost unlimited power (last seen used by HYDRA in Captain America), which allows him to open a portal into space. Meanwhile, he is forming an army consisting of a mysterious alien race, with which he plans to invade the Earth and declare himself its ruler.

Nick Fury (Samuel L. Jackson) of S.H.I.E.L.D. has one trick up his sleeve: the Avengers initiative. As he explains, the idea was to bring together a group of remarkable superheroes who, when they worked as a team, could defeat virtually any foe, and Earth could certainly use that at the moment. So Fury sets out to unite Iron Man (Robert Downey Jr.), The Hulk (Mark Ruffalo), Captain America (Chris Evans), Thor (Chris Hemsworth), Black Widow (Scarlett Johansson) and Hawkeye (Jeremy Renner), to defeat Loki and save the planet from invasion.

The Avengers is all about the ensemble, and there’s no one better suited for that than Joss Whedon, who has previously written on Buffy the Vampire Slayer and Firefly. It seems as if this was the film he was born to write, and I can’t imagine anyone else pulling it off quite like this. He has such a love for all of these heroes, and the highlight of the movie isn’t even the action; it’s seeing these people come together and bounce witty dialogue back and forth, all of which makes perfect sense for the characters. But Whedon doesn’t just assemble everyone to have them fight. He revels in and explores the fact that they, realistically, would not work well together. How does Captain America, a young patriotic soldier from the 1940s, feel about Tony Stark, an arrogant billionaire? How would Stark get along with the Hulk? Virtually all of the possible interactions are played out on screen, and the result is a new appreciation for all of the heroes, greater even than what many of the individual films achieved.

The actors seen in previous installments carry over their fine performances, especially Tom Hiddleston as the menacing Loki, who completely steels the show and is a lot of fun. New to the gang is Mark Ruffalo, playing the finest depiction of the Hulk we’ve seen so far. His performance doesn’t stand out as being obviously great like Robert Downey Jr.’s does, but Ruffalo does a solid job of portraying Bruce Banner in a subtle way, as a man who always seems to be on the verge of exploding at any given moment. We also get to explore more in depth Black Widow, played by Scarlett Johansson, who is given far more to do here than in Iron Man 2, and she ends up being surprisingly memorable.

Going back to the dialogue, one of the biggest surprises about The Avengers (though not really a surprise to anyone familiar with Whedon’s previous work) is how genuinely and consistently funny it is. The movie knows it’s not The Dark Knight. There’s no allegory about terrorism or wiretapping going on here. Whedon understands that, on some level, a lot of what we’re seeing here is pretty silly, and he isn’t afraid to revel in that silliness when appropriate. Each and every major character has several hilarious, perfectly timed one-liners and individual gags, many of the best belonging to the Hulk, which had my audience laughing and cheering as hard as any comedy I’ve ever seen. I love The Dark Knight, and I certainly can’t wait for Rises, but it’s great to see a superhero film which is all about having fun, and that doesn’t feel the need to take itself too seriously.

Audiences are coming to The Avengers for the action, and I can’t imagine any of them leaving dissatisfied. This film contains more of it than every single one of the Marvel lead up movies combined. It all culminates in a giant, citywide battle sequence, featured prominently in the trailers. This is some of the most satisfying action we’ve seen in a long time, and the reason for this relates directly back to Whedon. Because his screenplay is so well written, we care about each and every one of these characters. Compare this to the action in a Michael Bay film, for example. It’s visually stunning to look at, but we care nothing about the people involved, there are virtually no stakes, and we’re really just watching a bunch of cool looking computer generated effects. Whedon elevates his climatic sequences far above that. While some might find sections of the movie slower and more dialogue based than expected, it’s all worth it because by the end, every member of the group is important, we care about them all, and everyone has something to do.

Of course, there are nitpicks to be had with The Avengers. The alien race which accompanies Loki is a little bland, and we never really understand completely who they are. It takes a bit longer than some might hope to assemble the Avengers together, the overall structure can be somewhat predictable at times, and as far as the ensemble goes, Hawkeye is never really as well developed or as interesting as everyone else. But these minor quibbles never take away from the overall experience, which is one of pure fun and excitement that only the very best films of this genre can achieve. The Avengers takes an idea that should have never worked and exceeds far beyond what we could have hoped for. Joss Whedon has cemented himself as one of the most talented writers in the business, with a screenplay which is well crafted, witty, and that explores these characters in ways we’ve never seen before. I can’t think of a better movie to kick off the season, because The Avengers is a perfect example of truly great, thoroughly satisfying summer blockbuster.