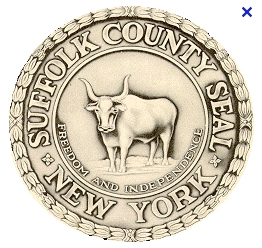 “Now, more than ever, in this age of constantly changing technology, it is critical that we preserve what has come before so that we can continue to honor and learn from the past, said County Executive Bellone.  “Peter Cohalan has deep roots in Suffolk County, a long record of public service and a passionate interest in local and American history.”

Presiding Officer Lindsay added, “Suffolk is rich in history and its history is the fabric of the American experience.  We ought to preserve that.”

Cohalan traces his family’s own American roots to the American Revolution, when his Irish ancestors fought against the British under Lafayette, the French General allied with George Washington.  A former Islip Town Supervisor (1971 – 1979) and Suffolk County Executive (1979 – 1986), Cohalan recently retired from the New York State Supreme Court where he served for more than twenty five years.

Actively involved in historic preservation for four decades, Cohalan has participated in numerous local historical organizations, including the Sayville Historical Society in the hamlet where he resides, the Aaron Burr Association, American Irish Historical Society, and the W.K. Vanderbilt Historical Society of Dowling College, as a member of the Board of Directors.

The County Historian is responsible to research historic events within the County and promote the preservation of historic documents and materials to ensure a full understanding and appreciation of the County’s history.  The Riverhead-based Suffolk County Historical Society will provide office space for the newly appointed County Historian.