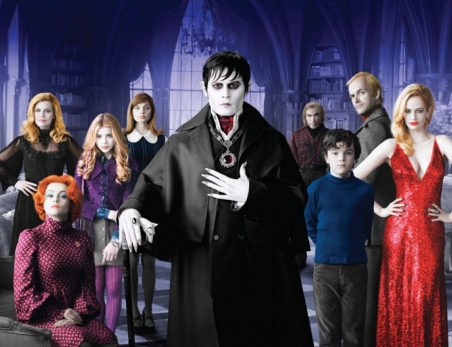 Tim Burton’s Dark Shadows, based on the late ‘60s TV series of the same name, may stick a little too closely to its soap opera roots. The set design is gorgeous, filled with beautiful gothic scenery, and Burton no doubt has a visual eye that will always draw me. Depp gives a typically committed and somewhat amusing performance as the lead character. Yet by the end, it feels as if something is missing. Like a real soap opera, Shadows is surprisingly slow, has a bit too much going on and, despite some worthwhile highlights, never quite adds up to something that feels complete or satisfying.

The story revolves around Barnabas Collins (Johnny Depp), a rich and powerful master of Collinwood Manor in 18th century New England. During the film’s opening narration, he becomes romantically involved with a young woman, while inadvertently breaking the heart of another, Angelique Bouchard (Eva Green), who also happens to be a witch. In retaliation, Angelique murders Barnabas’s beloved, and curses him into becoming a vampire. Before long she rallies the townspeople against him, and Barnabas is buried alive. Nearly 200 years later, in 1972, he is unearthed and emerges into modern times, where he finds Collinwood Manor in disarray.

Johnny Depp’s performance as Barnabas, an eccentric outsider, is familiar yet satisfying. There’s something about his willingness to commit fully even to a character as silly as this that I find endlessly appealing. Of course, the joke is that he is completely out of his element and dumfounded by modern society, and the humor comes from seeing Barnabas’s reactions to McDonald’s signs, troll dolls, lava lamps, The Carpenters, etc. These are obvious fish out of water gags, yet Depp manages to make most of them work by being utterly sincere and never hinting that he’s in on the joke. If it wasn’t for the film around him, this character could be pulled straight from an actual vampire story from ‘30s or ‘40s horror cinema. Of course Angelique, the witch from the opening sequence, returns as the film’s villain when she hears Barnabas is back in town. Eva Green is without a doubt the highlight of the cast, fairing well even against Depp himself. She’s constantly wearing a sinister grin, enjoying every second of Barnabas’ misfortune, and Green does a solid job of capturing that.

The rest of the cast is made up of the present day Collins family. There’s the matriarch of Collinwood manor, Elizabeth (Michelle Pfeiffer), her rebellious daughter Carolyn (Chloe Moretz), her brother Roger (Jonny Lee Miller), and his son David (Gulliver McGrath), who has been having encounters with ghosts. Also thrown into the mix is Willie Loomis, a drunken groundkeeper (Jackie Earle Haley) and David’s psychiatrist Dr. Hoffman (Helena Bonham Carter, obviously). Then there’s Victoria (Bella Heathcote), a mysterious young girl who bears a striking resemblance to Barnabas’s lover from the beginning of the film.

If that sounds like a lot, it really is. Burton tries to give all of the Collins family something to do, but it never quite works because they’re all essentially one-note characters, most of whom go criminally undeveloped and verge on parody. We’re given endless amounts of inter-family drama and subplots, yet none of it is fleshed out enough to be important. The result is a film that feels unfocused, as if it’s creating arbitrary drama as it goes along which never goes anywhere.

In just one example, after the opening titles the movie dedicates about 15 minutes to setting up a character named Victoria, only to have her completely disappear for long stretches of the film. What was the point of all that? There are way too many storylines here, and most of them never resonate or have much of a resolution anyway. And though Barnabas’ goofiness is fun in its individual scenes the central thrust of his story, aside from the love triangle, is his desire to revitalize the family’s dying business. In the midst of a film involving vampires, witches and ghosts, it’s hard to find rebuilding a fishing company to be terribly interesting. Was there not a more compelling story to be told here?

Despite what the previews would suggest, Shadows isn’t all comedy. It’s hard to say it’s completely serious, either. The tone is all over the place, varying from a straight horror movie, to family drama, to love triangle, to self-aware spoof. One minute we’re watching Barnabas brutally slaughter a bunch of innocent construction workers while the music swells, and the next minute we’re laughing as he gawks at a McDonald’s sign. Sometimes, as in the opening narration, things are being taken deadly seriously, and other times Burton is practically winking at us and reveling in his own silliness. By the end, we get a pretty interesting, special effects ridden final showdown between Barnabas and Angelique. This is a lot of fun, because Burton finally finds a tone that works and commits to it. But by then, it’s too late.

Dark Shadows is probably exactly the movie Tim Burton and Johnny Depp wanted to make. It feels very much like a modern day, supernatural soap opera, and in that way it’s somewhat successful. Fans of the show, and of ‘70s nostalgia in general, should find a lot to like here. But like a soap opera it’s very slow, filled with tons of characters and story lines which are added and dropped at pure random, and much of the running time is spent watching people standing around delivering exposition. Shadows isn’t a total failure, and it has some truly great things to offer: many of Depp’s gags work, Eva Green’s villain character is excellent, and the visual effects and cinematography are stunning, appearing to be ripped straight out of a classical, gothic horror story. This is a film of great moments that, unfortunately, don’t quite add up into a compelling story. All the pieces are there, but they don’t fit together.